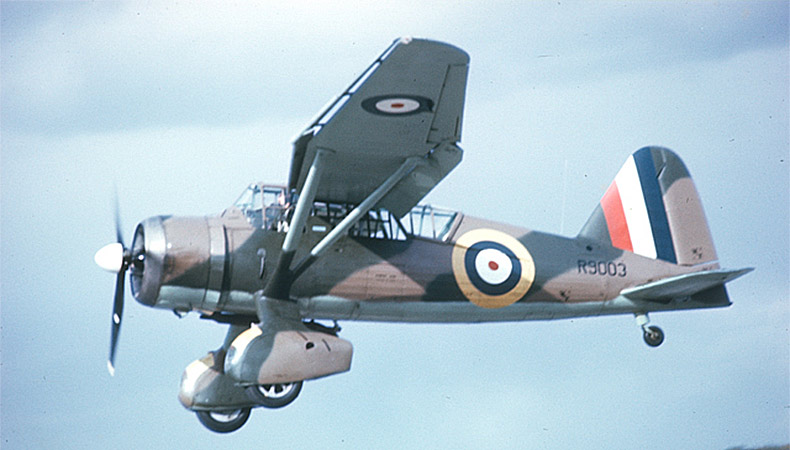 The Lysander was built to a specification calling for a rugged, short-take-off-and-landing (STOL) aircraft for low-level reconnaissance and observation. Unfortunately the specification had been drawn up with First World War in mind. However excellent an airplane, the Lysander proved too vulnerable to survive modern warfare. After 1940, British Lysanders were used for search-and-rescue, and unusual missions such as flying spies in and out of the continent. Canadian-built Lysanders were used chiefly as target tugs at Canadian bombing and gunnery schools.

Called the “Lizzie”, the Lysander was a remarkable flying machine with excellent low-speed capabilities. A Lizzie drifting backward over the airfield as it flew slowly into a headwind was a remarkable sight at Canadian training bases. Spy delivery and pick-up flights were hazardous affairs during which jet-black Lizzies flew with ladders fixed outside and with the rear cockpits jammed with operatives. Landings took place at night in open country inside France or Belgium on improvised landing areas lit by flashlights held, it was hoped, by members of the resistance.

Donation from the Canadian Air Force

The Museum's aircraft was made using parts of three Lysanders. It was built as a centennial project by the RCAF at Winnipeg, Manitoba. The exact identity of the three aircraft is uncertain, but it is known that the fuselage was manufactured by Westland Aircraft Limited in Yeovil, United Kingdom and the wings by National Steel Car Corporation in Malton, Ontario. The composite aircraft was finished in the markings of a Lysander I serving with No. 110 Squadron RCAF in England in 1940.

This Lysander was first flown on December 29, 1967 by project officer Captain Bernie Lapointe. It was used for several demonstrations in Western and Central Canada before being flown to Rockcliffe airport. It was donated to the Museum in September 1968 and was last flown in October 1970.