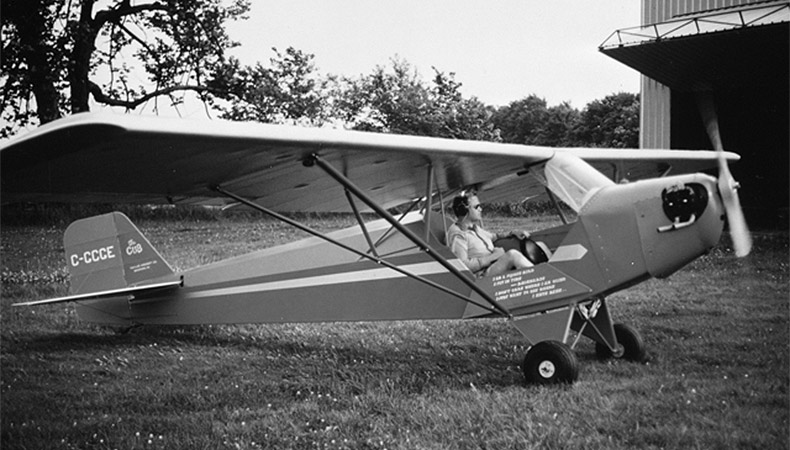 The success of the Aeronca C-2 prompted the Taylor Aircraft Company to introduce a new light airplane design, the E-2 Cub. The company became the Piper Aircraft Company in 1937. The Cub proved popular for both private flying and instruction. Just under 350 were made when production ceased in 1936. The E-2 led to an improved version, the Taylor J-2 Cub, in 1935, and to the famous Piper J-3 Cub in 1937. Three E-2 Cubs were imported into Canada before Second World War and two after the war.

In its various forms the Cub was one of the best known aircraft ever built. For a great number of people, the name “Cub” is still synonymous with light aircraft.

This E-2 was built by the Taylor Aircraft Co. in August 1935 and registered to its first owner, Gordon Curtis of New York City, on September 6. It had four more owners before going in 1940 to the Choate School, a boys preparatory school at Wallingford, Connecticut, where it was used for ground instruction.

In 1975, Garth Elliot of Toronto bought the aircraft and meticulously restored it with the assistance of Max Say and the co-operation of Frank Shaineline and D.J. (Dick) Berg of the Department of Transport. During this time, the wings were destroyed by fire and a new set was obtained in Ohio. The Cub was first flown in Canada on July 30, 1980.

The Museum exchanged an unrestored E-2 for this aircraft in June 1985, so that an E-2 could be displayed in the Museum's new building.