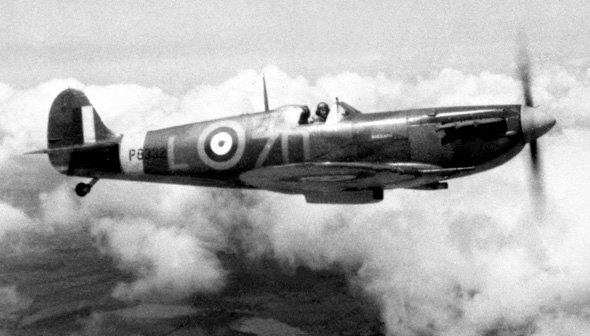 The Spitfire IIB was a modification of the Spitfire I with a more powerful engine and factory-installed armour plate. Some early Mk. IIs participated in the Battle of Britain but this version was used mainly in the initial offensive sweeps over Europe until superseded by the Mk. V. It is finished in its original presentation markings.

On loan to the Canadian War Museum

This Spitfire was manufactured by the Supermarine division of Vickers-Armstrong Limited at the Castle Bromwich Aircraft Factory in the United Kingdom in 1941. It is the only surviving "presentation Spitfire"; its production costs were paid by the State of Soebang, Dutch East Indies (today's Indonesia). Taken on strength by the RAF in 1941, the aircraft was briefly used for convoy patrols and sweeps over France. Shortly afterwards, it was damaged, repaired in England and then stored.

In 1942 it was transferred to the RCAF and shipped to Canada, where it was displayed in many locations, notably at Toronto City Hall. After the war it was sent to an RCAF training school in Camp Borden, Ontario. Throughout the 1950s and early 1960s, the Spitfire was exhibited at numerous venues, including the Canadian National Exhibition in Toronto and Parliament Hill in Ottawa. It was exhibited on Parliament Hill in Ottawa in September 1960, for example, during Battle of Britain Week. It was made part of the RCAF's historic aircraft collection in 1964.

The Spitfire was transferred to the Museum in 1968. In 1988 it was refinished in the markings of No. 222 Squadron RAF, which it had served in 1941. It has been on loan to the Canadian War Museum since September 1988.