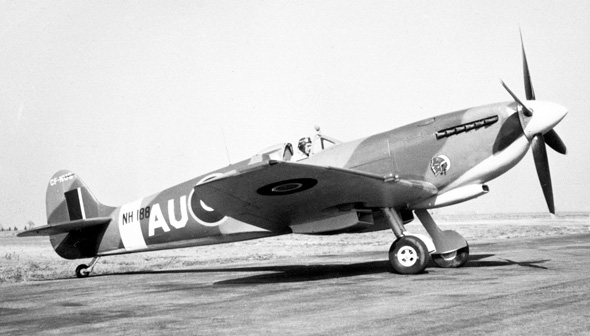 The Mk. IX successfully countered the challenge posed by the superb German Focke-Wulf FW 190. The L.F. Mk. IX’s lower-altitude capabilities were enhanced by an engine designed to give its best power at a lower altitude and, in some cases, by the removal of the wing tips to increase the speed and rate of roll.

This Spitfire was manufactured by the Supermarine division of Vickers-Armstrong Limited at the Castle Bromwich Aircraft Factory in the United Kingdom in 1944. In 1944 it flew with a Polish squadron and an RCAF squadron. It was damaged by anti-aircraft fire around D-Day, and was stored by the RAF from late 1944 to 1946.

In 1946 the aircraft was sold to the Dutch Air Force. Sent to the Dutch East Indies (today's Indonesia) in 1947, it was flown infrequently until its return to Holland in 1950. It was sold to the Belgian Air Force in 1952, rebuilt, and then used as a trainer. The Spitfire was written off after a crash in 1954. A private company then purchased the aircraft and rebuilt it to tow targets.

John N. Paterson of Fort William, Ontario purchased the Spitfire and brought it to Canada in 1961. After rebuilding it, Paterson donated the aircraft to the Museum in 1964, flying it to Ottawa for Air Force Day.