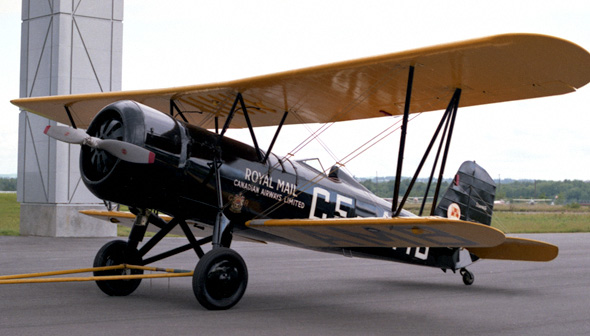 The Stearman 4 is considered by some to be the ultimate civil biplane in North America. The Stearman 4 was the first North American production aircraft to use the new aerodynamically efficient NACA engine cowl . In their heyday, Stearman 4s were the fastest aircraft in Canadian skies, even faster than the RCAF Siskin fighters.

This Stearman 4EM was built as a 4E model in 1930. It was one of three 4Es supplied to the Standard Oil Company of California, which used it as a corporate aircraft. It was converted to a crop-duster in 1944 by Carberry Crop Dusters Incorporated of Fresno, California. The company used the aircraft until it was acquired by Dean Wilson of Homedale, Idaho, who then sold it to John Paterson of Fort William (now Thunder Bay), Ontario in January 1965. Over the next four years, Paterson restored it as a 4EM model flown by Canadian Airways.

In 1970, over the course of three days, this aircraft flew from Fort William to Rockcliffe airport, carrying commemorative mail. On arrival on September 25, it was presented to the Museum, and it has been on display since that time. It serves as a reminder of those long-ago days when, without the benefit of radio and other modern amenities, pilots donned helmets, goggles and parachutes in preparation for delivering mail.