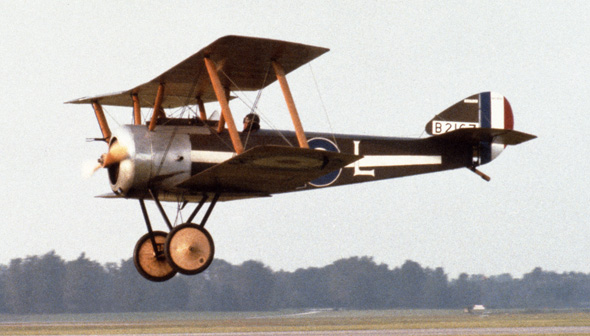 The Pup was T.O.M. Sopwith’s first single-seat fighter. Royal Naval Air Service tests proved very successful and were closely followed by successful Royal Flying Corps tests. The RFC ordered their first Pups in April 1916 with the RNAS following suit in June. Deliveries to the two services began in September and November 1916 respectively. Pups operated through the thick of the fighting in 1917 then were gradually withdrawn to become trainers. Four companies manufactured 1 575 Pups before production stopped in October 1918.

"Pup", the only name ever used for the airplane, was not recognized by the authorities, who had officially named it the “Scout”. Many considered it, however, to look like the pup of its larger predecessor, the 1 1/2 Strutter, so the name stuck. The Royal Naval Air Service employed Pups to pioneer the use of floating vessels as a base for flying operations.

The Museum's Pup is a reproduction built in 1967 by George Neal of Toronto. Manufacture of the Pup took over seven years to complete. First flown by Neal on September 2, 1967, the aircraft was featured in several air shows and fly-ins in the Toronto area before the Museum purchased it in 1973. It was re-covered and finished as Pup B2167, aircraft "L" of No. 66 Squadron RFC. For civil identification it bears the registration CF-RFC.