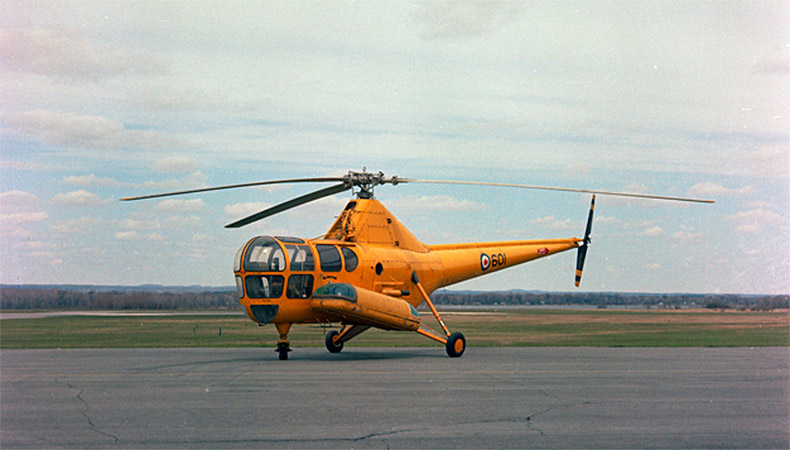 The S-51 was an early postwar development of the R-5. Although intended for the civilian market, most S-51s went into military service. They served with all the US military services as well as with the air forces of Australia, Britain, Canada and France. The seven RCAF S-51s were designated H-5. The first helicopters in the RCAF, they were used mainly for training and experimentation, although some did search-and-rescue work. All H-5s were retired by the mid-1960s. The United States built 214, and 165 were made in Britain.

For rescue operations the H-5 could be fitted with external closed stretcher carriers. The US Air Force used S-51s extensively for casualty evacuation and the recovery of downed pilots during the Korean war.

This H-5 was manufactured by the Sikorsky Aircraft Division of United Aircraft Corporation in Bridgeport, Connecticut in 1947. It was the first helicopter built for the RCAF and was taken on strength at Rockcliffe airport on April 5, 1947. The helicopter was assigned to RCAF Trenton, Ontario on training duties until January 1948. It was then transferred to Edmonton, Alberta, where it served with a search-and-rescue unit known as K Flight.

In 1950, the aircraft was returned to Trenton for repair and overhaul. Next it was sent to Rivers, Manitoba in July 1951, to serve with the Canadian Joint Air Training School. In November 1954, the H-5 was moved to Cold Lake, Alberta, where it was used by No. 105 Communications and Rescue Flight, formerly known as K Flight. In 1959, the helicopter was transferred to Chatham, New Brunswick, where it was stored. The RCAF transferred the helicopter to the Museum in 1964.