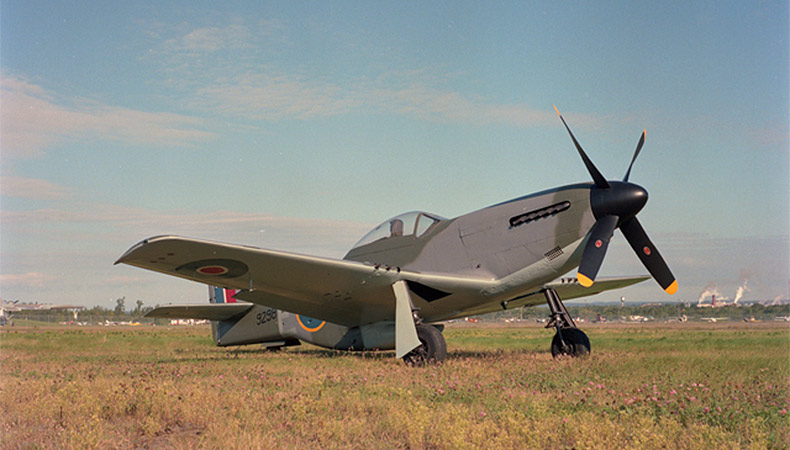 The versions of this superb airplane fitted with a Rolls-Royce Merlin engine were arguably the finest all-round fighters of Second World War. Its long range permitted bomber escort from Britain to southern Germany and back. The Mustang was also the first US Air Force fighter to serve in the Korean War. The RCAF flew Mustangs in Second World War and in 1947 received 130 aircraft to equip two regular and six auxiliary squadrons. The Mustang retired from RCAF service in 1960.

Although designed and built in 117 days, the Mustang incorporated such advances as a laminar-flow wing and simple lines for easy production. A long-range night fighter version, the “Twin Mustang”, was two Mustangs overlapping one wing each to create a twin-engine, two-pilot airplane. Stock and modified Mustangs were still competing in air racing in the 1990s.

This Mustang IV was manufactured in 1945 by North American Aviation Inc. in Inglewood, California, and served first with the U.S. Army Air Forces during the Second World War. Details of its American history are unknown.

In March 1951, this Mustang was acquired by the RCAF and served with the City of Vancouver (Auxiliary) Squadron, which operated out of the Sea Island Airport, near Vancouver, British Columbia. In the early 1960s, the RCAF started transferring its historical aircraft to the Canadian War Museum, commencing with the Mustang IV in December 1961. Transfer to the Canadian War Museum was stopped when it was determined that it did not have adequate facilities. The Mustang was then transferred to Rockcliffe Airport in 1964. It is finished as a Mustang III of No. 442 "City of Vancouver" Squadron in 1945.