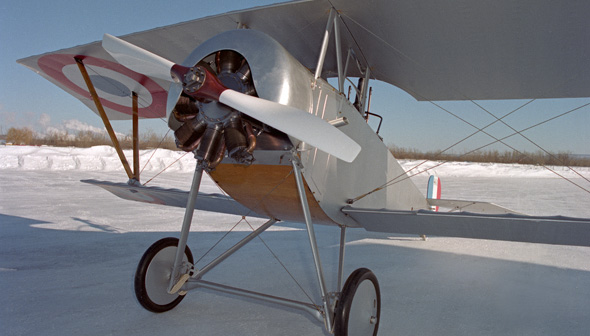 Designed for observation, the Nieuport 12 served with the Royal Flying Corps, the Royal Naval Air Service and the air forces of France, Italy and Russia. The aircraft operated with the RFC and RNAS in 1916, but was not popular with crews and was withdrawn from front-line operation by the spring of 1917.

The first Canadian aerial victory of First World War was achieved by a Canadian gunner in the similar Nieuport 10, in December 1915.

Built in 1915, this Nieuport 12 was a gift to Canada from the Government of France. Transported from France to Halifax by steamship in February 1917, the War Trophies Board exhibited the aircraft across North America as a war relic, to raise public support for the war effort. This Nieuport was the first aircraft that the Canadian government retained for its historical significance, and is one of only two known to exist worldwide. It was transferred to the Canadian War Museum in the 1930s and to this Museum in 1965. In the 1990s, the Museum's skilled conservation team restored it to appear as it would have during its 1917 exhibition tour.