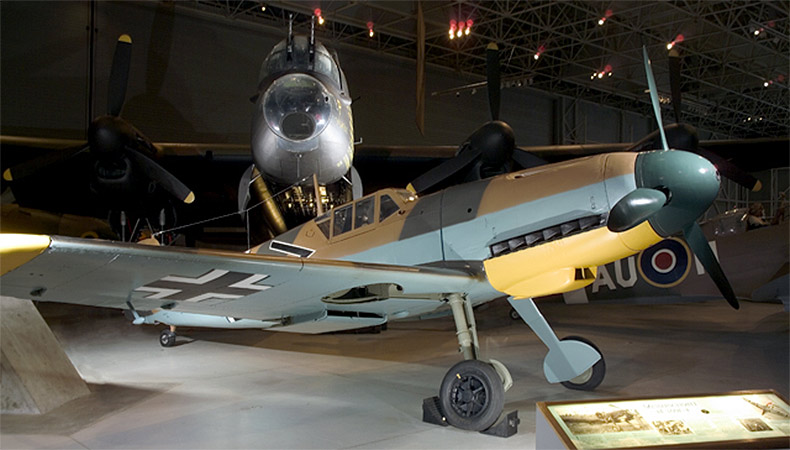 The Messerschmitt Bf 109 is one of the greatest fighter aircraft of all time. When the prototype flew in 1935, it was the most advanced fighter in the world. Fitted with ever more powerful engines and weapons, this aircraft remained a formidable opponent even in the later years of the Second World War.

The Bf 109 served everywhere the German Luftwaffe was engaged and the type was used by a dozen other air forces. With more than 33,000 built between 1935 and 1956, it can boast a longer history of production and service than any other piston-powered fighter. Fast and powerful, the Bf 109F introduced in late 1940 had the nicest flying characteristics of all Bf 109 versions.

This Messerschmitt Bf 109F-4 was manufactured in Germany by Erla Maschinenwerk in 1942 for the Luftwaffe. In August of that year, the aircraft was damaged during aerial combat and crash-landed near the Arctic port of Murmansk in the Soviet Union. The pilot survived.

Little is known about the aircraft after this point. It was eventually crudely restored for display in a Soviet museum. In the mid-1990s, it was acquired by Aero Vintage Ltd., a British restoration organization, and refinished in its original colours. The original bullet holes were not repaired, and remain visible.

The Messerschmitt Bf 109F-4, which belonged to Mr. Jeet Mahal, was acquired through exchange with Aero Vintage Ltd., England, for one of the Museum's two Messerschmitt Me 163B Komet rocket fighters. A Canadian Forces aircraft delivered the Bf 109 to the Museum in the early part of June 1999, where it was reassembled and put on display.