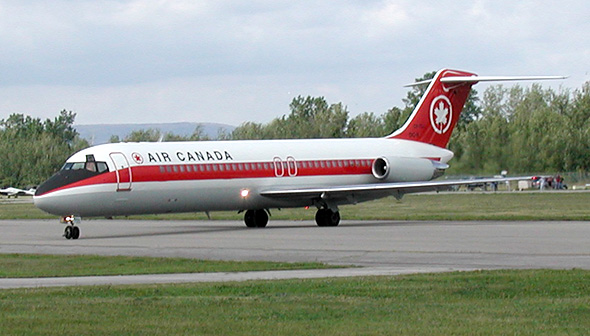 The DC-9 was the first twin-jet airliner to be operated in Canada and was no doubt the aircraft on which countless Canadians made their first jet flight. In 1966, Air Canada became the first airline outside of the United States to operate the type. Many of the aircraft’s larger components such as wings, rear fuselage and tail unit assemblies were manufactured in Canada.

During the 1950s, Air Canada’s predecessor company, Trans-Canada Air Lines, had pioneered turbine powered passenger travel in North America with Vickers Viscount propeller-driven airliners. These turbo-props were then replaced in turn by fan-jet DC-9s. At the height of their deployment, Air Canada had a fleet of fifty DC-9s serving most of its destinations in North America. For over thirty years these easily recognized jet transports, with their aft mounted turbofan engines, gave outstanding service as the mainstay of the airline’s short-haul routes.

This DC-9 was manufactured in 1968 by the McDonnell Douglas Corporation of St. Louis, Missouri and was acquired by Air Canada the same year. It flew 81,558 hours: more than any other Air Canada DC-9. It also flew the most trips overall, taking off and landing 72,464 times.

The Museum's aircraft was donated by Air Canada in 2002 after making the last flight of a DC-9 in Air Canada markings. It had been repainted in its original 1968 colours.