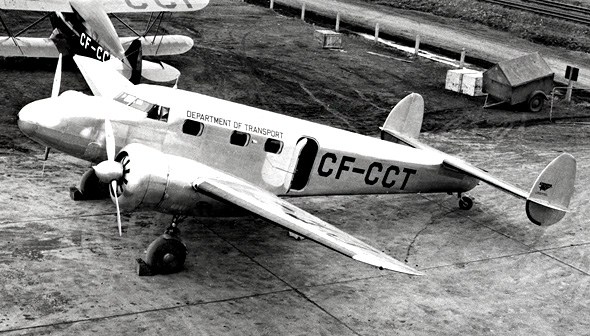 Designed as a smaller version of the 10A, the Lockheed 12A was well liked by corporate operators and private individuals, but less popular with feeder airlines who considered them too small. Many were used by the US Army Air Corps and other air forces. The RCAF had ten Lockheed 12As on strength during Second World War. These were later sold as surplus and continued to fly with private operators after the war. Production was terminated early in Second World War.

Donation from Department of Transport

This aircraft was the only Model 12 to be registered in Canada before the Second World War. It was bought in May 1936 by the newly established Department of Transport, which needed a modern high-performance aircraft to use in surveying routes for the proposed trans-Canada airway, and setting up and calibrating the department's radio facilities. The aircraft spent its entire working life with the Department of Transport.

This Electra Junior is best remembered for its July 31, 1937 journey: the first same-day Montreal-to-Vancouver flight, which had five stops along the way. The flight was arranged to take the Minister of Transport, the Honourable C. D. Howe, and other government officials over the proposed airway route.

The Museum added this aircraft to the collection when it was retired in 1963 after more than twenty-five years of work. It was considered a fine example of a light transport of the period and an aircraft that had played a major part in establishing Canada's airway system.