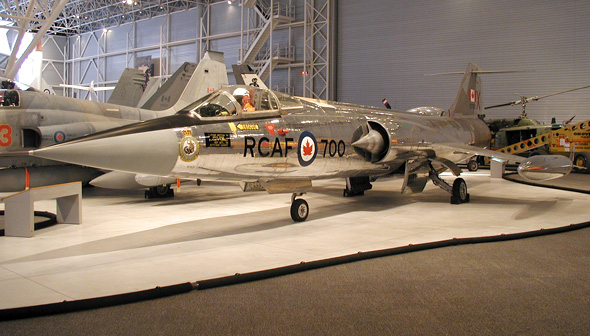 The RCAF selected the F-104 to replace its Sabre fighters in Europe. The small F-104 Starfighter was an attempt to counter the trend towards increasingly heavier fighters after Second World War. As it evolved, however, the F-104 also got heavier, with the G model almost overloaded with equipment and weapons. With engines built by Orenda, Canadair produced 200 single-seat CF-104s and another 140 F-104Gs for NATO countries. The Canadian Forces phased out its Starfighters in 1986.

This Starfighter was built by Lockheed Aircraft Corporation in Burbank, California in 1957. It was accepted by the U.S. Air Force in November of that year and began service at Elgin Air Force Base in Florida. It served with the U.S. Air Force until November 1959 and was then placed in storage in Palmdale, California. The aircraft was shipped to Canadair for use as a pattern aircraft for production of the CF-104, which was to be built under licence.

The RCAF acquired the Starfighter in June 1963. Two years later, it was transferred to the Central Experimental and Proving Establishment at Uplands airport in Ottawa.

On December 14, 1967, Wing Commander Robert A. White set a Canadian altitude record of 30,513 metres (100,110 feet) flying the Starfighter. As a result, White was made an Officer of the Order of Military Merit and inducted as a member of Canada's Aviation Hall of Fame in 1974. The aircraft was transferred to the Museum in June 1968.

To achieve good performance with a very small wing, the thin, high-speed profile of the Starfighter could be altered for low-speed flight by drooping the leading and trailing edges of the wings. High-pressure air blew over the drooped trailing edge to maintain a smooth air flow. The aircraft was unfairly considered crash-prone, but most accidents were caused by the method of flying required and poor weather. The ejection seat was rocket-powered.