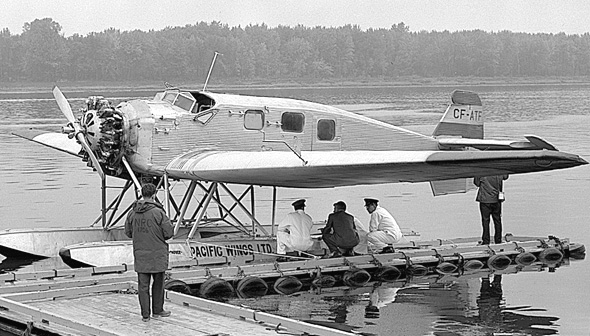 The Junkers W34 continued the line of all-metal Junkers aircraft going back to the Junkers J.I. With its good flying characteristics and rugged construction, the Junkers W34 was considered by many to be the best bush plane of the 1930s and early 1940s. Only nine were imported to Canada due to the high cost of its metal construction and the heavy tariff imposed on German aircraft. Canadian Airways was the primary Canadian operator.

A Junkers W33 with a water-cooled engine flew the first east-west trans-Atlantic flight in 1928. It landed on Greenly Island in Labrador after a 37-hour flight.

The W34 was widely exported and up to the end of Second World War was the German Air Force’s standard instrument and navigation trainer. The Museum example was still flying up until its donation to the Museum in 1960. The handover ceremony in 1962 was the last flight of any of the Junkers F13/W33/W34 family of aircraft.

Made in 1931, this Junkers W34 was registered to Canadian Airways in December 1932. In its early years, it was based at Oskélanéo, Quebec, from where it mainly served the mining industry in the Chibougamau area. In the summer of 1939, it was sent west to Lac du Bonnet, Manitoba, where it was flown mostly in the Red Lake area. Over the next twenty years the aircraft changed hands several times, until it was finally sold in 1962 to the widow of James A. Richardson, founder of Canadian Airways. Muriel Sprague Richardson donated the aircraft to the Museum on September 17, 1962. The aircraft was flown from Kamloops, British Columbia to the Museum. The aircraft's handover ceremony marked the last flight of any of the Junkers F13/W33/W34 family of aircraft.