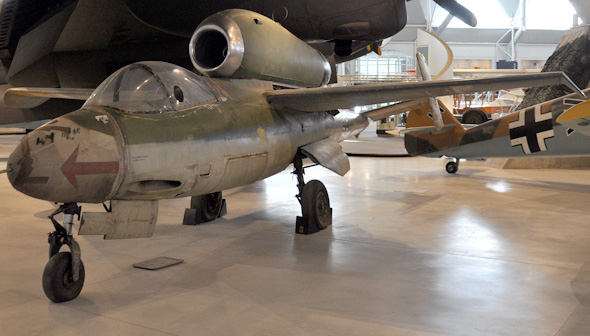 The Heinkel He 162 jet fighter was conceived, designed, and built in 90 days as a last attempt by Germany to avoid defeat in Second World War. Intended as an inexpensive fighter, the Heinkel He 162 could be built by semi-skilled labour out of non-strategic materials. After initial aerodynamic and structural problems were solved, the German Air Force began receiving Heinkel He 162s in 1945, but there is no evidence that they saw action. Records from the period are incomplete, and it is not known exactly how many were built.

Total scheduled output of Heinkel He 162s was to be 4000 per month. Pilots supplied for this vast output were to be given glider training and assigned directly to this jet fighter. It is fortunate that this plan was never realised since the He 162 was no machine for the inexperienced. Even seasoned pilots had to use extremely smooth and delicate control movements to stay out of trouble. A rudimentary ejection seat carried the pilot past the engine air-intake on bailout.

This Volksjäger was assembled by Heinkel Flugzeugwerke GmbH at the Heinkel-Nord plant in Rostock-Marienehe, Germany, probably in late February or March 1945. The aircraft was captured from the Luftwaffe at Leck on May 8, 1945. Shipped to the United Kingdom in June of the same year, it was exhibited as a war trophy in Hyde Park, London during September. Stored in the United Kingdom until the following spring, it was shipped to Canada in September 1946 and, in the RCAF's possession, likely stored. It was transferred to the Canadian War Museum in 1964 and to this Museum by 1967.