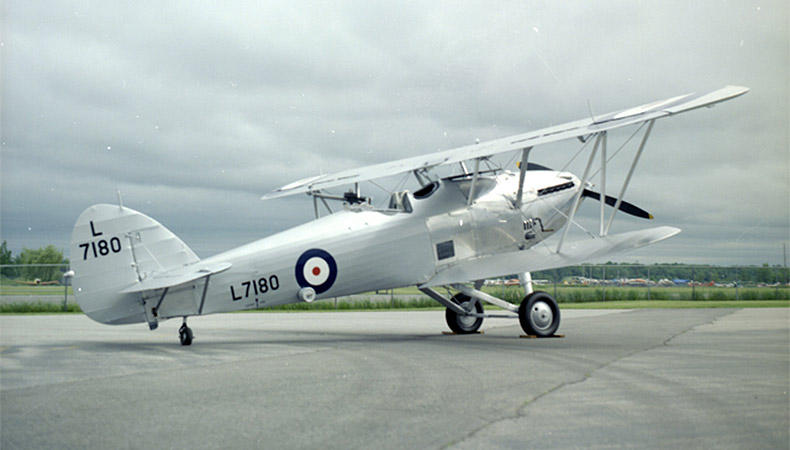 The Hawker Hind was developed from the fast and beautiful Hawker Hart. Prior to the delivery of the new Fairey Battle and Bristol Blenheim, the Hind was an interim replacement light bomber in the RAF. Although most Hinds were two-seater bombers, some were fitted with dual controls and used for pilot training. Production ceased in 1938 after 528 were built.

Most of the freshly trained bomber pilots of the mid-to-late 1930s began squadron life flying Hawker Hinds. The last biplane light bomber flown by the RAF, the Hind had vanished from first-line and even auxiliary squadrons by 1939.

Donation from the Government of Afghanistan

This aircraft was built in 1937 as a light bomber for the RAF. It was one of nineteen Hinds donated to the Royal Afghan Air Force in 1939. It served this air force in the 1940s and was then used as a training airframe (a teaching aid for mechanics and ground crews) in the 1950s.

In 1974, an interest in collecting a significant military biplane from the interwar era led the Museum to enquire whether any Hinds remained in Afghanistan. The Afghan government located this Hind in a Kabul junkyard and, after some negotiation, the country's President donated it to Canada as a means of furthering relations between the two countries.

Alfred J. Shortt, Assistant Curator, and W. Merrikin, Chief Restoration Officer, travelled to Kabul in October 1975 to disassemble the aircraft and help the Canadian Forces load it onto a transport aircraft. The Hercules arrived at Ottawa's Uplands airport in November 1975. The Hind was trucked to Rockcliffe airport to await restoration, which was undertaken by George Neal in Toronto in 1984. The work was completed in 1988 and the aircraft was returned to the Museum.