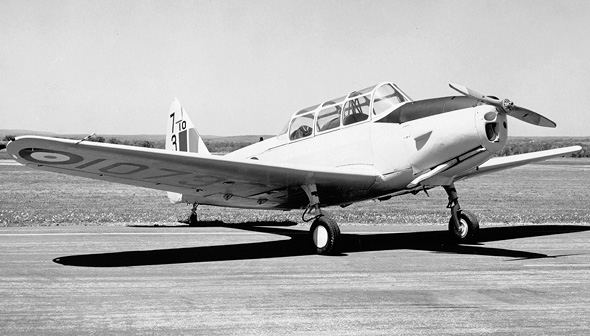 The Fairchild Cornell was the successor to the Tiger Moth and Fleet Finch for elementary pilot training in the British Commonwealth Air Training Plan . The RCAF version, which served until 1947, was the Cornell III, manufactured by Fleet Aircraft, Fort Erie, Ontario. In late 1943 a series of wing failures occurred, requiring reinforcement of the main spar. After the war many Cornells were sold for civilian use, but the wing spar problem continued and required stringent annual inspections. This weakness greatly reduced their popularity. Canada built 1 642.

Although Cornells were also manufactured in Canada for the US Army Air Forces, none was delivered there. Most of the US Army Air Forces order was sent to the RAF under lend-lease, with the balance going to the RCAF. Twenty Canadian-built Cornells were used by the Royal Norwegian Air Force at their two wartime bases in Ontario. Some Canadian-built Cornell IIs were shipped to Africa and India to be used in training schools.

This Cornell III was manufactured by Fleet Aircraft Limited in Fort Erie, Ontario in July 1942. It was issued to the RCAF No. 4 Training Command in Regina, Saskatchewan, and served in BCATP Elementary Flying Training Schools until July 1944.