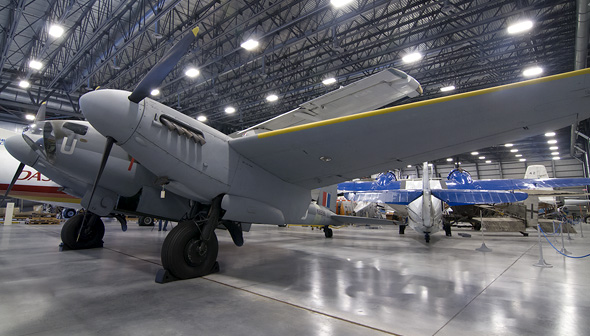 Early in Second World War, de Havilland applied their woodworking expertise to the development of a wooden bomber so fast that it would not need defensive armament. The result was the Mosquito, a most remarkable aircraft. The amazingly adaptable design was effective for day and night fighting, day and night bombing, anti-shipping attack, and photo reconnaissance. Canada built a total of 1 013 during the war and 100 postwar, with 205 going to Nationalist China in 1947-48.

The bomber version of the Mosquito could deliver the same bomb-load to distant targets as the four-engined Boeing B-17. Mosquitos were also used as high-speed transports by British Overseas Airways Corporation (BOAC) to maintain communication with neutral Sweden and bring back strategic items such as ball-bearings. Passengers, if any, rode in the bomb bay. Because of the glued-and-screwed wooden construction, early Mosquitoes were not suited to the tropics where exposure to high humidity and rain caused the airframe to warp and the glue to dissolve.

Manufactured in 1944, this Mosquito, a Mk XX bomber, was built by de Havilland Canada. It was acquired by the RCAF in June 1944, and served with No. 7 Operational Training Unit at Debert, Nova Scotia. Following the war, it was placed in storage until 1964, when it was transferred to the RCAF's historic aircraft collection at Rockcliffe airport.