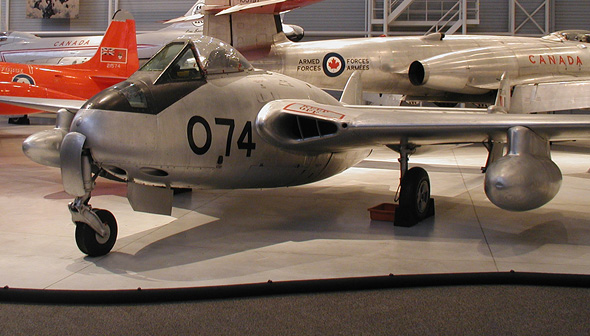 Production of the Vampire started just too late for Second World War. This very successful design was produced in several versions and flew with the air forces of more than 15 countries. In 1948 it was the first Jet fighter to enter the Royal Canadian Air Force. Here, as in other air forces, it introduced fighter pilots not only to jet flying, but also to cockpit pressurization and the tricycle landing gear. A simple rugged design, the last Vampires were not phased out of the Swiss Air Force until the late 1980s.

In developing the Vampire, de Havilland applied its expertise in wood construction to manufacture a fuselage of the same type of plywood/balsa wood sandwich used in the Mosquito. The Vampire’s twin-boom configuration enabled the jet tail pipe to remain short in order to extract as much thrust as possible from the somewhat low-powered engines of the day. The prototype sea Vampire was the first jet aircraft to fly from an aircraft carrier.

Manufactured in 1948, the Museum's Vampire 3 served with No. 1 Fighter Operational Training Unit at St. Hubert, Quebec until 1949, with No. 421 Squadron at Chatham, New Brunswick until November, 1953 and later with No. 442 City of Vancouver Squadron, before being placed in storage in 1956. It was transferred to the RCAF's historic aircraft collection at Rockcliffe airport in 1964. The Museum also holds the RCAF's sole Vampire I.