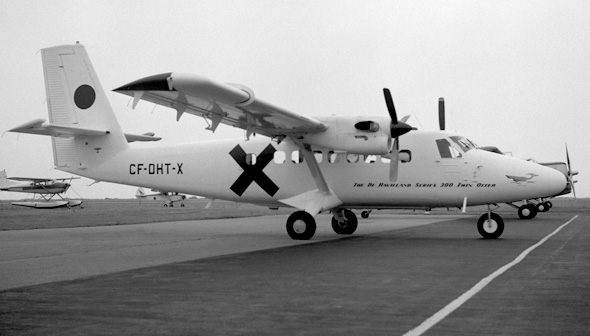 The Twin Otter, a twin-engine, modified and enlarged version of the Otter, was a successful attempt to produce a commuter airliner with parts in common with the Otter. As with all good Canadian utility aircraft designs, Twin Otters can be fitted with wheels, skis or floats. Though designed and used as intercity commuter or feeder liners, they are also operated as bush airplanes in deserts, mountains, and the Arctic, or anywhere where rugged reliability and short-take-off-and-landing capability are required.

In the Arctic Twin Otters are sometimes flown on “tundra tires” - huge, low-pressure balloon-tires that can operate on and off soft, boggy ground.

Built in 1964, this aircraft is the prototype, or first, Twin Otter to be built. It is one of three de Havilland Canada prototypes in the Museum's collection (the others are the Beaver and the Dash 7). The black X on the Twin Otter's fuselage stands for "experimental," meaning that the aircraft was used only for testing and flight demonstrations. The aircraft was donated to the Museum by de Havilland Canada in 1981.