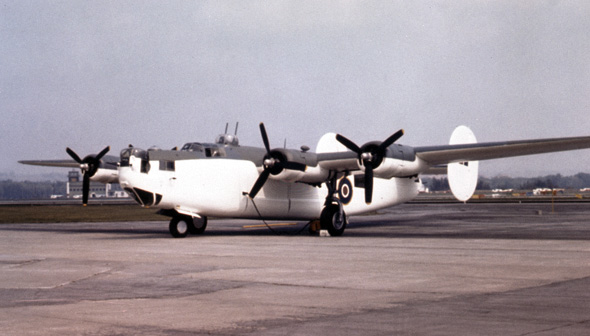 The Liberator was designed as a strategic bomber to augment the already existing Boeing B-17. Large numbers were produced and they flew effectively in all Second World War theatres. Though more vulnerable than the B-17, the Liberator had excellent load and long-range capabilities, which made it ideal for ocean patrol and anti-submarine duties. Those without armament were used as transports. A single-tailed patrol bomber version flew with the US Navy during the war.

The Liberator, with its long range, could provide convoy protection in mid-Atlantic where other land-based aircraft were not able to operate. This capability was instrumental in turning the tide against the U-Boats in the latter half of Second World War. Transport versions were operated from Ottawa, carrying mail, passengers, and VIPs between Canada and Europe.

This Liberator was manufactured at the Ford Motor Company plant at Willow Run, Michigan and delivered to the RAF in 1944 on the Lend-Lease program. It was abandoned in India after the Second World War. The Indian Air Force (IAF) refurbished it in 1949, using it until 1968.

The Liberator came to Canada as a result of a gift the RCAF had made to the IAF. In 1967, the IAF's Chief of Air Staff visited the Museum at Rockcliffe airport. He was so enthusiastic about the Westland Lysander III display that when another Lysander became available, a high-ranking Canadian officer sent the Rockcliffe airport Lysander III to India as a gift. In return, the IAF's Chief of Air Staff arranged that this Liberator be given to Canada.

A Canadian crew ferried the aircraft from New Delhi to Canada. The journey took sixty-nine flying hours and covered a distance of 16,900 kilometres (the longest ferry flight of any Museum aircraft), arriving in Canada in June 1968. No. 6 Repair Depot RCAF at Trenton, Ontario subsequently refinished it as an RCAF Eastern Air Command anti-submarine aircraft.