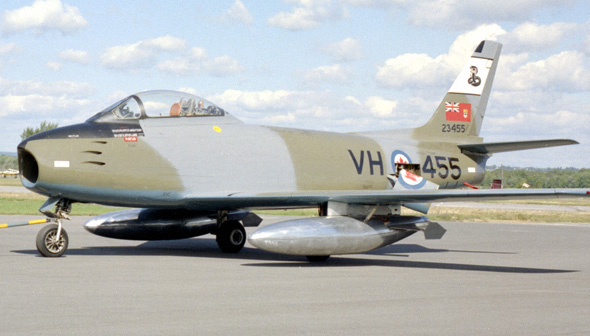 In the early 1950s, Sabre 2s serving with the RCAF were the only swept-wing fighters in NATO. As a day fighter, the Sabre 6 was unsurpassed in Europe. The first two squadrons of Sabres were transported to Europe on aircraft carrier HMCS Magnificent. Sabres were subsequently flown across the Atlantic to Germany from St. Hubert, Quebec, shepherded by a North Star, via Goose Bay (Labrador), Greenland, Iceland and Kinloss (Scotland).

This Sabre 6 was manufactured by Canadair Limited in Montreal in February 1955. It was test flown and accepted by the RCAF in March of the same year.

On July 4, 1955 it was delivered to No. 444 Squadron at Baden-Soellingen, West Germany, to be used to help defend Western Europe. It was transferred to a Technical Services Detachment at Scottish Aviation Limited, in Prestwick, Scotland, most likely for maintenance, in September 1958. The Sabre remained in Scotland until fall 1959, when it was sent to the Zweibrucken air base in West Germany. Stored there until 1961, it was sent to Scottish Aviation in August. By November, it was at an RCAF Depot in London, Ontario.

Moved to No. 6 Repair Depot in Trenton, Ontario in January 1964, the aircraft was transferred from the RCAF to the Museum’s collection in April that year. It has been finished in the markings of No. 444 “Cobra” Squadron.