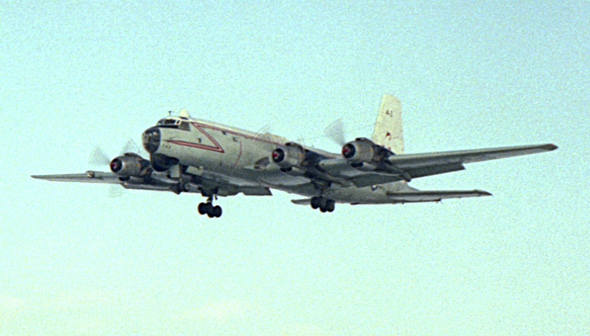 The Argus was a radical redesign of the Bristol Britannia featuring a new, unpressurized fuselage and powerful piston engines. The redesign increased the low-altitude range and provided space in the aircraft for weapons and electronic equipment. Thirteen Mk.1s were built. The remaining 20 were Mk.2s, with upgraded electronics and a smaller radome (radar dome). Argus aircraft operated successfully over Canada’s ocean boundaries. They were retired from the Canadian Armed Forces(CAF) in 1982.

The Argus was equipped with a powerful radar, underwater listening devices, electronic countermeasures equipment, and a magnetic anomaly detector, which at low altitude could detect deformations in the earth’s magnetic field caused by metal objects as small as a boat’s engine. For night visual identification, a remote-controlled 70-million candlepower searchlight was located on the wing. Equipped with four bunks and a galley, the Argus could accommodate two crews for 24-hour-plus flights. In its early years, the Argus was undoubtedly the finest anti-submarine patrol bomber in the world. Maximum range was 8,190 km (5,089 mi).

This Argus was the last one built. It was manufactured by Canadair Limited in Montreal, Quebec in 1960. It operated with No. 405 Squadron RCAF in Greenwood, Nova Scotia from 1960 to 1978, when it was transferred to Canadian Forces Base Summerside in Prince Edward Island. It served there until 1982 and was then retired and transferred to the Museum in a May 17, 1982 ceremony. The Argus is the largest aircraft in the collection and the Museum's hangar doors were designed to accommodate it.