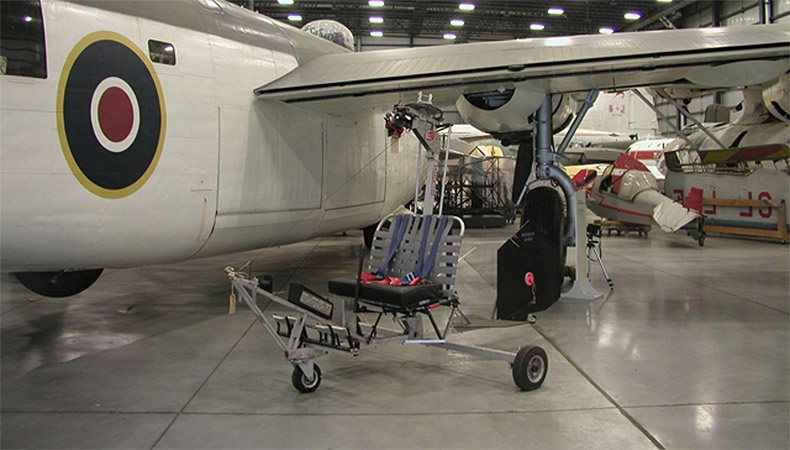 A number of small gyroplanes have appeared in the recreational aircraft community since the 1970s. Gyroplanes require specialized pilot training and need to be flown cautiously as the flight parameter envelope is very narrow. (The gyroplane is a rotary-wing aircraft that derives its lift from a free-wheeling rotor. See Bensen B8MG Gyrocopter). The Gyroglider two-seater was designed as a flight trainer by the Bensen Aircraft Corporation to teach the fundamentals of gyroplane control. The Museum’s example was built and modified in Toronto by Mr. Alexander Dutkewych.

A small one-cylinder engine pre-rotated the Gyrogliders rotor before takeoff. Towed behind an automobile at about 45 km/h (28 mph), the machine carrying the instructor and a student-pilot would reach an altitude of approximately 30 meters (100 ft). Upon towrope release, the aircraft would descend to the ground in autorotation. Both pilots could communicate with an intercom.

Alexander Dutkewych and Timothy England assembled this B8 Gyroglider in Toronto, Ontario in 1977, using a kit produced by Bensen Aircraft Corporation in Raleigh, North Carolina. It was built as a training aircraft to teach landing skills and safety. While gyrogliders were designed to be motorless, Dutkewych installed a small one-cylinder engine to this one to start the rotation of the rotor. The aircraft was one of only two gyrogliders inspected, approved and registered in Canada. It was flown until the early 1980s.

Dutkewych donated the aircraft to the Museum in 2002. It shares a set of interchangeable aluminum rotors with the Museum's Bensen B8MG Gyrocopter, which was also built by Dutkewych.