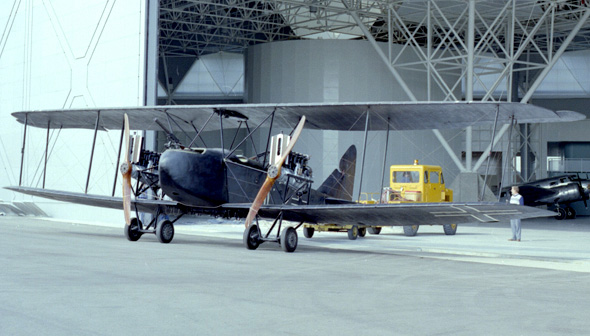 The Allgemeine Elektrizitäts Gesellschaft (A.E.G.) G.IV bomber went into general use with the German Air Force during 1917. Because of its relatively short range, the G.IV served mainly as a tactical bomber, and operated close to the front lines. The G.IV flew both day and night operations, but, as the war progressed, was restricted increasingly to night missions. A.E.G. units operated in France, Romania, Greece, and Italy.

Many night operations were nuisance raids with no specific targets, but with the intention of disrupting sleep and perhaps doing some damage. The crew was equipped with electrically heated suits and the aircraft fitted with radios. The G.IV is the only surviving aircraft displaying the distinctive German First World War "night lozenge" camouflage pattern. Although the rear gunner's cockpit is on the top of the fuselage, his position was equipped with a hinged window in the floor for viewing and fending off pursuing aircraft.

The Museum’s G.IV is the only surviving multi-engine German aircraft from the First World War. It was shipped to Canada as a war trophy in 1919; over the next forty years its movements were not well documented and its two 260 hp Mercedes engines were lost. The aircraft was stored in a warehouse operated by the Canadian War Museum in the 1950s. Between 1968 and 1969, it was restored by No. 6 Repair Depot, RCAF, at Trenton, and its original engines were replaced with 160 hp Mercedes engines. It was transferred to the Museum in 1970.