Today, wearable technology can be found in entertainment, education, finance, fitness, music, personal safety, and medicine. While body-worn technologies have existed for centuries, today’s wearable technology is often connected to digital software and the Internet. In the health sector, we have fitness trackers like Fitbit and smart clothing like Hexoskin, which measure our biometrics and monitor our healthy behaviours. To make our lives more efficient, we have smartwatches, Bluetooth headsets, and even smart eyewear like Google Glass that places a layer of digital information right before our eyes. To make our lives more fun, we have gaming consoles like the Oculus Rift that immerse us inside of a story, bringing us into a new world of virtual reality.

Depending on the type of wearable technology, devices work in different, complex ways. However, most wearable technologies today share a few things in common. They are form-fitted to work with the human body, they connect to digital software to collect information and interpret actions, and they connect with networks to permit information to be shared with other devices, people, and databases.

Some devices – such as smartwatches or wireless headphones – use Bluetooth technology to connect all personal devices, in order to synchronize them. Others, like fitness trackers, can measure heart rate and movement, in order to measure sleep cycle and workout performance. They often synchronize with a computer or smartphone, to consolidate data so trends can be identified.

Wearable technology allows us to extend the capabilities of our own bodies. These technologies have a major influence on every aspect of our lives, including our communication with one another and the world.

Most importantly, these technologies can be life-saving. Doctors can use them while performing surgeries to float medical images and consult with colleagues remotely during an operation. In 1996, the “Smart Shirt” was employed by the military of the United States to monitor soldiers’ vital signs and better employ medical care in those critical minutes after injury. Finally, companies like CUFF Smart Jewelry and Lifeline have been introducing wearables which can send an alert if the wearer is in any danger, providing alerts in an emergency.

It must be said, however, that many wearable technologies have not seen the popularity to match their potential. Consumer concerns include limitations of functionality, low battery life, and privacy. Some wearable technologies have the ability to collect and share information that people want to keep private – even if they are not the wearer themselves. However, companies are taking note of these issues and are attempting to improve them, in order to drive further innovation in this field.

One Canadian who is putting wearable technology to the test is Erica Wiebe - Rio 2016’s Olympic 75 kg freestyle wrestling gold medalist. Using Hexoskin biometric clothing, she was able to track her performance to refine her training and get the best results. It seems as though her strategy was effective – she even has a gold medal to prove it! 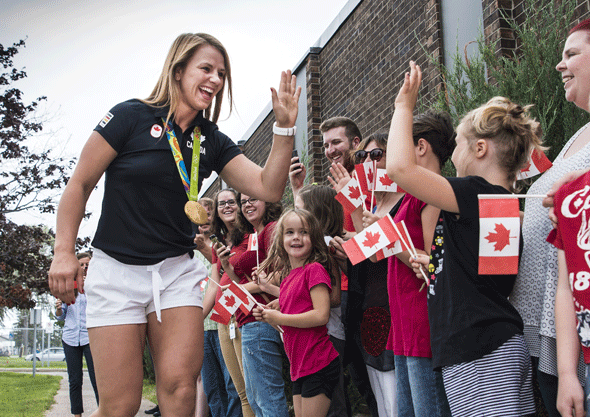 Check out the Wearable Tech exhibition at the Canada Science and Technology Museum. Discover how wearable technology has evolved throughout history, and try some out for yourself!