An idea from the time the sky was the limit, Part 2 Hello there, my reading friend. I am pleased to see you made it back to this webpage. As promised, yours truly is pleased to provide you with further information on the Pentecost Hoppi-Copter. Are we ready? Do buckle up. Please. The year was 1945, but then you already knew that, having read the caption of the photo in the second part of this article, and… You did read the caption and memorise its content, didn’t you? Sigh. Please do so now. I’ll wait. No gold star for you today, by the way.

So, the year was 1945 as the first Hoppi-Copter began to take shape. Its main components were a small engine and a pair of coaxial main rotors that turned in opposite direction – a technology we came across in an August 2017 issue of our blog / bulletin / thingee. The tubular metal frame that supported the engine curved to rest on the pilot’s shoulders. A fabric harness similar to that of a parachutist was fastened to his chest and legs in order to keep the frame firmly in place. Would you believe that the pilot of the 40-kilogram (90-pound) Hoppi-Copter took off and landed on his legs? I feel weak in the knees just thinking about it, but I digress.

Enthused by his idea, Horace Thomas “Penny” Pentecost left his job in December 1945 and founded Hoppi-Copters Incorporated. This writer cannot say when Pentecost’s highly ingenious design was completed and tested. This being said (typed?), the Hoppi-Copter won a second prize at the World Inventors Exposition held in Los Angeles, California, in July 1947. Ironically, the first prize was won by one Stanley Hiller, Junior, who had designed a helicopter fitted with a pair of coaxial main rotors that turned in opposite direction. And yes, my attentive reading friend, the name Hiller was mentioned in previous issues of our blog / bulletin / thingee, in October and November 2017 to be more precise. Good catch, but back to our story.

Sadly enough, the Hoppi-Copter was not put in production. Pentecost and the odd pilot made only 20 or so tethered flights. The tiny machine had proven too difficult and dangerous to fly. Struggling to control all the weight strapped on his back, a pilot could stumble and fall, which could lead to injury. Worse still, the blades of the rotors would hit the ground and shatter, producing potentially lethal splinters.

Undaunted, Pentecost went back to the drawing board. The second version of the Hoppi-Copter was a more powerful open frame single-seat helicopter fitted with a landing gear. It was aimed squarely at the civilian market. Pentecost quickly revised the design of his helicopter yet again, thus giving birth to his first marketable design. The first of 3 prototypes / pre-production machines, powered by an engine apparently developed by Pentecost, made its first flight, indoors, in early August 1947. Pentecost was convinced that the new Hoppi-Copter could be of use to a variety of rural civilian users, from crop dusters and foresters to prospectors and trappers. He even looked at the possibility of developing a two-seat helicopter with en enclosed cabin, the Coupe-Copter.

As the days turned into weeks, Pentecost chose to further improve the Hoppi-Copter. Even so, the small machine remained somewhat tricky to fly. In particular, pilots consistently reported feeling disoriented when flying well above the ground. Flying in the open air in a noisy machine subject to vibrations, the pilots found it difficult to align themselves with the horizon. Flying straight and level thus proved challenging. In that regard, the Coupe-Copter might have offered an improvement, but no prototype was ever built.

It should be noted that Pentecost seemingly had no intention to contact the Civil Aeronautics Administration, the ancestor of today’s Federal Aviation Administration, an organisation with powers to regulate all aspects of civilian aviation in the United States, to obtain a helicopter certification. According to him, the Hoppi-Copter was in a class all its own. Unable and unwilling to cover the costs of establishing a new type of certification, Pentecost hoped to export several Hoppi-Copters to help push long the process.

In the fall of 1948, Pentecost sailed to the United Kingdom with 2 Hoppi-Copters. One of these was tested by the Royal Air Force. Like the American armed forces before it, this service was intrigued but saw no need to place an order. Pentecost was seemingly more successful in his efforts to set up a company in the United Kingdom. Hoppicopter Company was in business no later than November 1948. It kept at least one of the Hoppi-Copters taken across the Atlantic by Pentecost. The presence or absence of a factory has yet to be confirmed. The company may have worked with a small British engine maker, Marwyn Limited, to develop an engine for the Hoppi-Copter that worked better than the one developed by Pentecost. The reach of Hoppicopter’s directors exceeded their grasp, however. The new company did not produce a single helicopter. In the United States, Hoppi-Copters was no luckier.

In late 1948, for example, Pentecost considered the possibility of merging his company with Helicopter Engineering and Research Corporation. The tandem rotor 2-seat machine this American firm was working on was to be made in Hoppi-Copters’ small factory. For one reason or another, the project fell through. And yes, my reading friend, yours truly pinkie swears he will pontificate on the fascinating and highly convoluted story of the JOV-3, as the aforementioned tandem rotor machine was called.

Hoppi-Copters’ failure to take off was quite surprising given the fact that groups and individuals from more than 25 countries and colonial territories located all over the Earth had expressed an interest in acquiring one or more Hoppi-Copters by the end of 1947. Some of these individuals were missionaries working in isolated and roadless regions of Asia and Africa. Indeed, the number of potential sales eventually exceeded 1 300. As well, applications for dealerships may have come from all over the United States and many regions of the globe.

The reasons behind the commercial failure of the Hoppi-Copter are not mentioned in the sources consulted by the writer of these lines. Money, or the lack thereof, probably was a crucial factor. As bad as this absence was, a lethal blow may have been struck by Charlotte Pentecost, who had obtained a sizeable share of Hoppi-Copters when she divorced her husband. Joining forces with Pentecost’s lawyer, which seemed somewhat unethical, she gained control of the company and imposed another person as president, in January 1949. Pentecost immediately quit his positions as chief engineer and company director. Hoppi-Copters’ board of directors rejected these resignations but Pentecost refused to come back. By 1950, Hoppi-Copters was pretty much out of money. Its management decided to further develop, manufacture and sell its one product through licensing.

In any event, nothing much happened until 1956 when a group of investors took over Hoppi-Copters in order to produce the last design developed by Pentecost before his departure. Their attempts to raise money proved inadequate, however, and the project collapsed. Yours truly wonders if American Hoppi-Copters Incorporated, a company incorporated in early 1956, can be linked to that project. This being said (typed?), American Hoppi-Copters became Helicopter Corporation of America in 1958. Its owners still hoped to produce 1- or 2-seat helicopters. Their dream soon turned to dust.

By early 1950, Pentecost had designed a new derivative of the Hoppi-Copter. The Firefly was powered by 2 tiny ramjets, a very simple type of jet engine, mounted at the tips of the rotors’ blades. Pentecost’s partner in this venture died before the first flight of the prototype, which may not have flown at all. Pentecost set up Capital Helicopter Corporation no later than 1953. We know this because his company was negotiating a merger with Aerocar Incorporated, the maker of a well known flying car, the eponymous Aerocar. Had everything gone well, Aerocar would have produced the Hoppi-Copter in its small factory. Sadly, the project fell through and yes, yours truly promises to pontificate on the Aerocar at a later date. Pentecost, if you must know, eventually went on to other things. He died in March 1983 at age 74.

Ironically enough, around the mid 1950s, the American armed forces looked into the possibility of acquiring ultra light helicopters similar in concept to the Hoppi-Copter. The limitations of these machines were such, however, that none was put in production and yes, my enthusiastic reading friend, I may pontificate on one or more helicopters of this type at some point in the future.

Described as an air motorcycle and a helicopter for the masses, the Hoppi-Copter never lived up to its potential – or the hype of the press. Ironically again, it was through youth publications that this vehicle achieved its greatest success. Let me explain. Spirou et les héritiers, the 4th album of the adventures of Spirou, one of the great French language graphic novel heroes of the 20th century, went on sale in 1952, in Belgium. The story had been published in the illustrated weekly Spirou between July 1951 and March 1952. On the cover of the album was a backpack helicopter, the Fantacoptère, named after Spirou’s sidekick, Fantasio, who had developed it. Famous Belgian graphic novel artist André Franquin clearly based the Fantacoptère on the Hoppi-Copter.

Better yet, in the United Kingdom, Paddy Brennan, a highly successful Irish artist who worked in the United Kingdom from the mid 1940s to the mid 1980s, used the name Hoppicopter to identify the pretty basic single rotor backpack helicopter piloted by Flip McCoy, the Floating Boy. This now forgotten comic strip was offered to the readers of the British illustrated weekly The Topper in 1953-54 and 1963-64. McCoy seemingly abandoned his mini chopper for a jet pack during the second series of stories, which may have taken place in Australia. Pretty cool, eh, unless it’s pretty hot – an adjective that may better fit the climate down under? 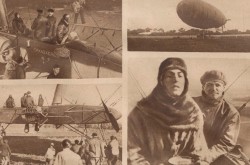