As their name implies, beef cattle are those breeds raised for their meat.  The Museum is home to Canada’s most popular beef cattle breeds.

Although natural breeding occurs on a majority of beef farms, the Museum uses artificial insemination (AI). The gestation period is approximately nine months, and cows have their first calves at two years old. Calving season for the beef cattle industry is January to April.

Mothers nurse their calves on pasture until the fall. From September to November, calves are weaned and moved to a feedlot. At this time, they weigh around 250 to 350 kilograms (550 to 770 pounds). Given a diet of silage, protein supplement, grain, and maybe some hay, calves gain about 1 kilograms (2.2 pound) per day. When they reach 500 to 600 kilograms (1100 to 1320 pounds) or 14 to 18 months of age, they are ready for slaughter. Grain is increased during the “finishing” period to create a thin layer of fat, which ensures tender, good-tasting beef.

Canada is the fourth-largest beef and cattle exporter in the world, with over 60,000 cattle farms and ranches. There are approximately 3.7 million beef cattle in Canada, of which nearly half are in Alberta. The average herd has 38 heads, but farmers need at least 75 to 100 heads to make a living. Many beef farmers also produce grain and/or raise dairy cows. Canada produces 1.2 billion kilograms (2.7 billion pounds) of beef per year. 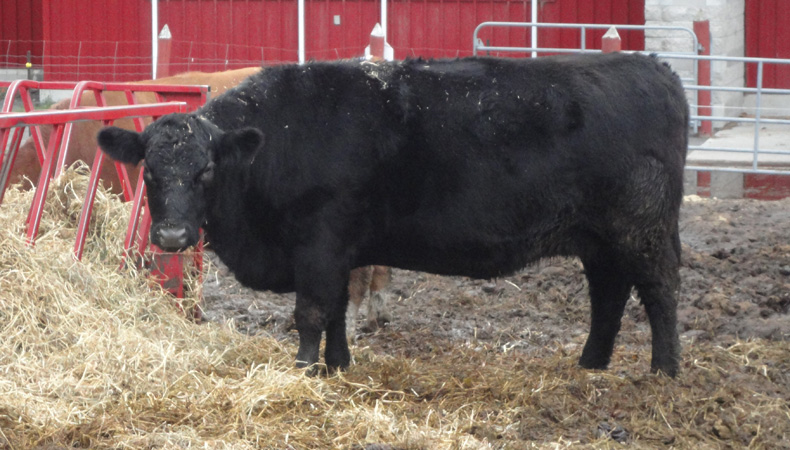 The Aberdeen Angus breed — sometimes simply called “Angus” — originated in Scotland. It is one of the few cattle breeds born without horns. The most common strain of Angus cattle is all black, but there is also an all-red Angus. 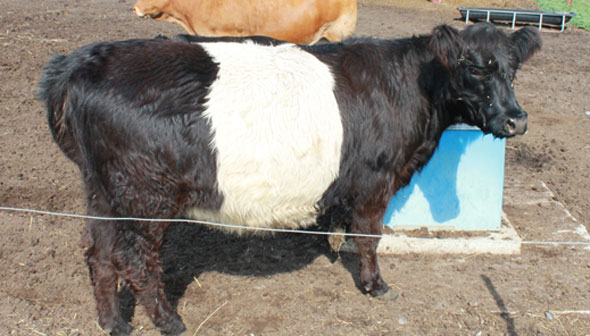 Belted Galloways — often called “Belties” — are so named for the white band around their middles. Because the rest of their coat is black, they are sometimes also called “Oreo cookie cows.” The black part of their coat can look brownish in summer. The width and regularity of the white band often varies but usually covers most of the body. It may also include the fore part of the udder. Belties are larger, milk-heavier, and faster-growing than their parental breed, the Galloway. 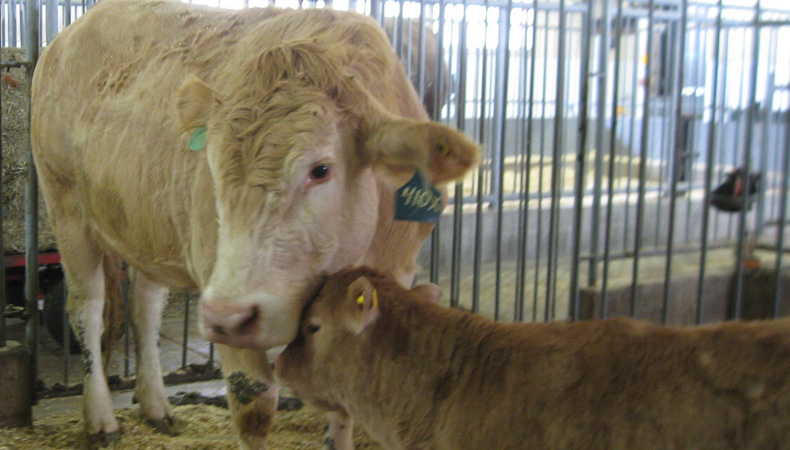 The Blonde d’Aquitaine breed is actually derived from three different breeds of cattle dating back to the Middle Ages. It originated in south-west France and was first imported to Canada in 1971. Like the Limousin and Charolais breeds, the Blonde d’Aquitaine is named for the part of France from which it comes (Aquitaine). It is called “Blonde” because of its solid wheat colour. Blonde d’Aquitaines have long bodies and are exceptionally strong. They were also used as draft animals. 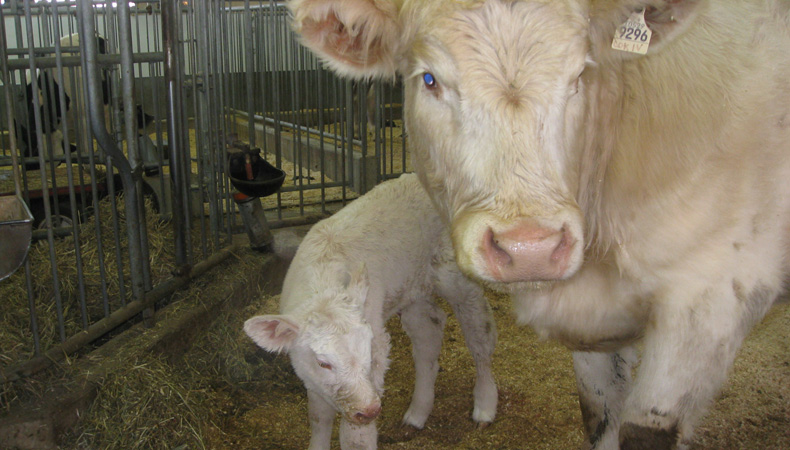 Originating in the province of Charolles in France, this all-white breed was introduced in North America via Mexico. The Charolais is very large and is known for its draft power. Cows can weigh up to 900 kilograms (2,000 pounds), and bulls can weigh up to 1,100 kilograms (2,400 pounds). The Charolais breed is often used to cross-breed with Angus and Hereford cattle, as well. 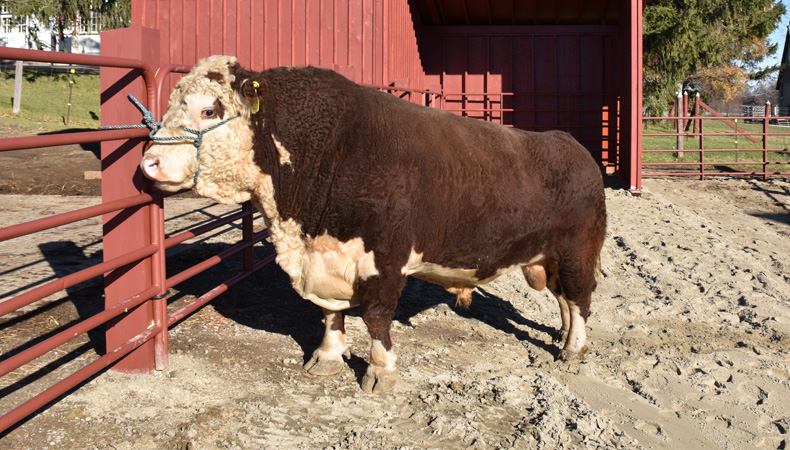 Hereford cattle first came to Canada in 1860 from the County of Herefordshire in Britain. It is the most popular breed in Canada. About 70 percent of Canadian beef cattle have some Hereford ancestry. Herefords are primarily red with white faces and can be horned or polled (hornless). 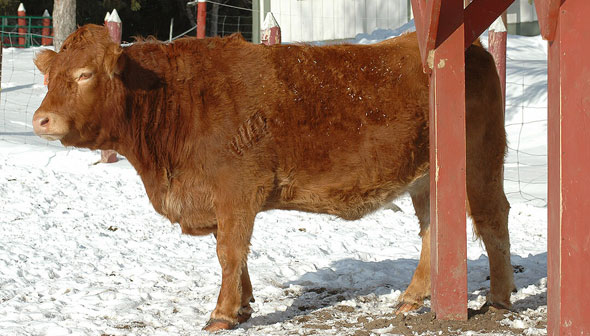 Limousin is one of the fastest-growing purebred cattle breeds in Canada. It originated in the Limousin region of France, for which it’s named. The breed first came to Canada in 1968. Limousin cattle are usually red-tan in colour, but they may be black if cross-bred with another breed. Popular choices for Limousin cross-breeding include Angus, Hereford, and Shorthorn. Like many beef breeds, Limousin cattle can be horned or polled (hornless). 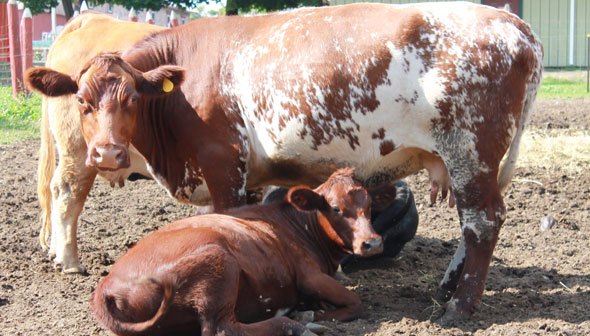 Shorthorn cattle first arrived in Canada in 1825, making them the country’s oldest recorded beef breed. As the name implies, the breed has short horns. They can be red, white, or roan (red and white) in colour. Shorthorns are popular for their adaptability, feed conversion, and docile temperament. Unlike many breeds, the Shorthorn is both a beef and a dairy breed. 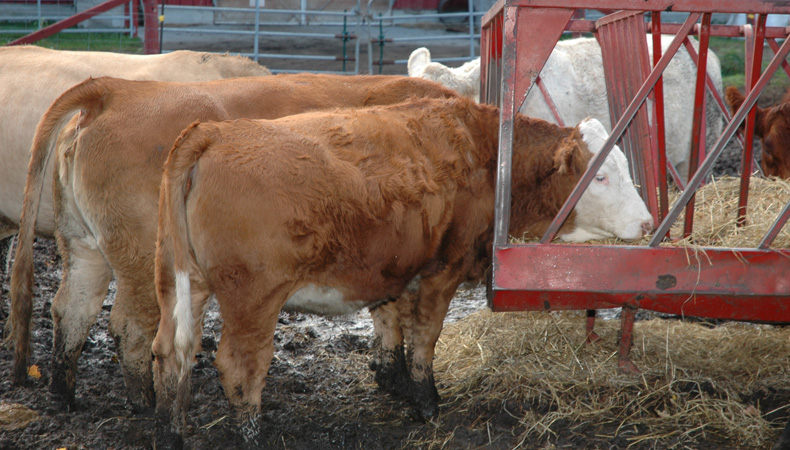 Simmentals were first imported to Canada in 1967. They originated in the Simme Valley in Switzerland. Like the Limousin, Charolais, and many other breeds, the Simmental gets its name from its place of origin. “Tal” means “valley” in German.

Ranging in colour from red to white to almost black, Simmentals are large, muscular cattle. The breed is known for its size and for its good temperament. It has also been used as a draft and a dairy breed.