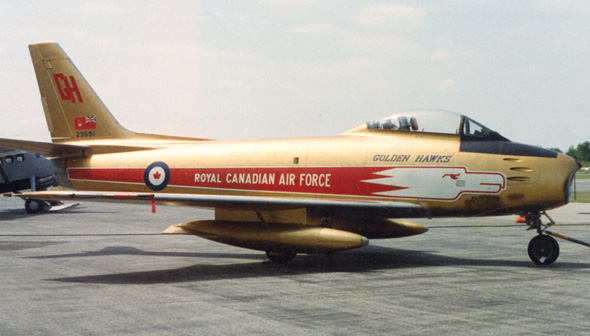 This Sabre 6 was manufactured in 1956 by Canadair Limited in Montreal, Quebec and was accepted by the RCAF in May of that year. In June the aircraft was delivered to No. 2 Fighter Wing RCAF station at Grostenquin, France. For the next four years it was used in France and Scotland in support of NATO.

The Sabre was returned to Canada in late 1960, when it was taken on by No. 6 Repair Depot in Trenton, Ontario. In the spring of 1961 the aircraft was moved to the RCAF station in Chatham, New Brunswick, where it stayed until October of the following year. It was then returned to Trenton and, in 1963, made part of the Golden Hawks unit. The Golden Hawks were an aerobatic team that flew Sabres painted metallic gold. Formed in 1959 to celebrate the fiftieth anniversary of powered flight in Canada, the team appeared at air shows in Canada over five years. This Golden Hawk was retired by the RCAF in 1963.

The aircraft was transferred to the Museum in April 1964. It was displayed at the National Museum of Science and Technology from 1967 to 1986. It is currently on loan to the Canadian Warplane Heritage Museum in Mount Hope, Ontario.