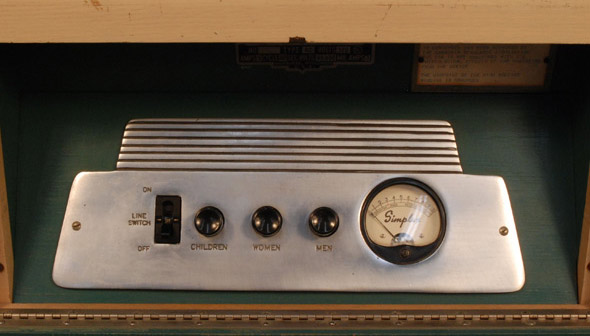 X-ray shoe fitters used fluoroscopic x-ray screens that dated back to the earliest days of x-rays, at the turn of the nineteenth century. The fluorescent screens displayed a real-time image of the body, rather than just a single x-ray photograph. The lower cabinet of the shoe fitter contained an x-ray tube in a lead-shielded base and, above this, a platform for the customer’s foot. When the x-ray tube was activated, a beam of x-rays passed upward through the foot and projected an image of it on the fluorescent screen. This screen was viewed through two, or sometimes three, eyepieces on top of the cabinet. Later models, such as this one, featured enhanced lead lining and buttons that delivered different radiation intensities and exposure times for men, women, and children.

One of the most conspicuous non-medical uses of the x-ray was the shoe-fitting fluoroscope. It allowed visualization of the bones and soft tissues of the foot inside a shoe, allegedly increasing the accuracy of the shoe fitting and thereby enhancing sales. The X-Ray Shoe Fitter Corporation became one of the leading manufacturers of shoe-fitting fluoroscopes. In Canada during the 1950s, the x-ray shoe fitter peaked in popularity, with reportedly 1,000 in use.