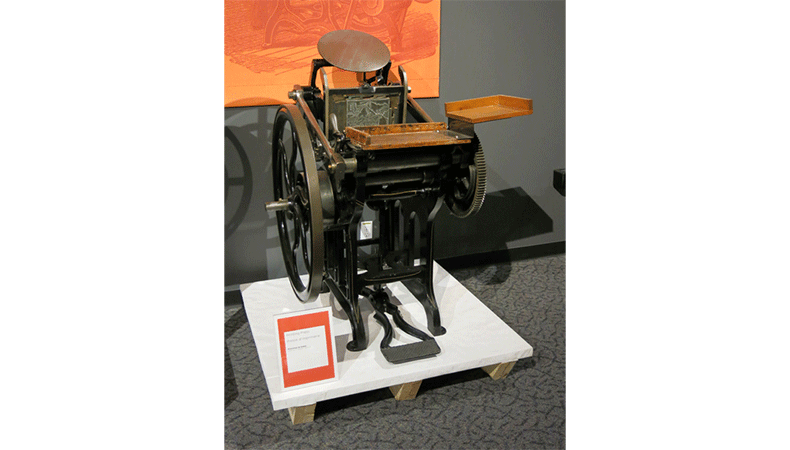 Westman & Baker were engineers and machinists in Toronto, Ontario, from 1874 until 1922, the year the company was purchased by Manton Brothers. Westman & Baker’s most popular products were printing presses and paper cutters. This printing press was donated to the Museum in 1973. It has been repainted in its original colour and the gold-coloured pinstriping has been restored.

American George Phineas Gordon invented this type of printing press around 1858. He named it the Franklin, claiming that Benjamin Franklin came to him in a dream and showed him its design. Gordon’s press was treadle-powered and featured automatic inking. It allowed a single operator to produce up to 2,000 impressions per hour, up from the 250 impressions that two workers could manage on the typical iron hand press of the time.

Gordon-style presses, which became known as platen or job presses, were hugely popular for small print jobs such as cards, handbills, and leaflets. After Gordon’s patent expired in the 1870s, foundries all over the world, including Westman & Baker, copied his ingenious design. The fine craftsmanship of Westman & Baker presses made them prize-winning pieces of machinery in Canada. Platen presses made by various manufacturers were common in Canadian print shops until the 1970s, and some remain in use for embossing work and art printing.