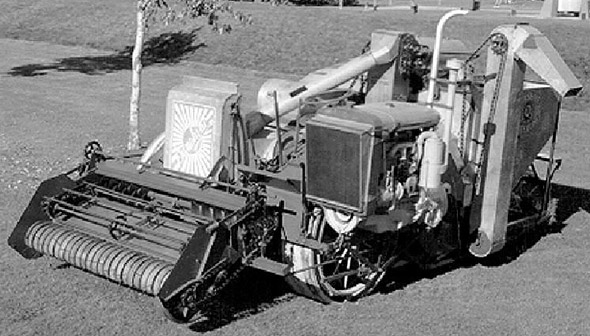 Purchase from a farm equipment distributor; used in the Moose Jaw area of Saskatchewan

The “Sunshine” Auto Header was one of the first self-propelled combines to have been mass produced and sold all over the world. It is equipped with a screw conveyor linking the header to the drum, a power-assisted header, an independent ground speed from the threshing speed, as well as a rotary pick-up.

The Sunshine Auto Header was designed and manufactured in Australia by H. V. McKay Proprietary Ltd beginning in 1923 and exported around the world, including to Canada. In 1930, Massey-Harris bought a stake in McKay and began manufacturing the Sunshine Auto Header in Waterloo, Ontario. Machines were built and assembled at the Waterloo factory before being sent by rail to western Canada, where they were sold by farm equipment distributors.