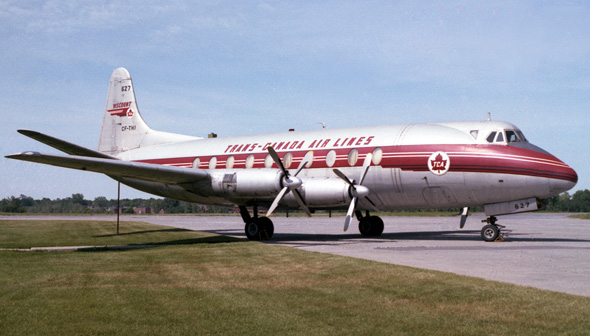 The Viscount, as the first turboprop airliner to go into production, broke the piston engine’s monopoly on air transport. It was also the first turboprop to fly a regular airline service. After requiring changes to make the Viscount more suitable for North American operations, Trans-Canada Air Lines ordered a total of 51. TCA flew Viscounts from 1955 until 1969. When modified Viscounts were also purchased by two US airliners, they became the first British commercial airplane to enter American service.

The Viscount brought a new level of comfort to air travel. The pressurized cabin allowed smooth high-altitude flight without passenger discomfort, while the reliable engines produced a minimum of vibration and noise. Even though the production Viscount was an enlarged version of the prototype, it soon proved too small. Practically every postwar airliner built has been followed by an enlarged or stretched version.

This Viscount was manufactured in 1957 by Vickers-Armstrong (Aircraft) Limited in Weybridge, Surrey, England. The aircraft's first flight was on May 19, 1957. It was accepted by TCA on May 26 and was the twenty-seventh Viscount delivered to TCA.

The aircraft served with TCA for almost twelve years, flying more than 27,000 hours. Its final flight was in November 1969. After its retirement, the airline (by then Air Canada) restored the Viscount to its original forty-seat, two-class configuration, painting it in its original TCA markings.

Air Canada donated the Viscount to the Museum in 1969. It was flown to Rockcliffe airport and became the first propeller turboprop-powered aircraft in the Museum's collection.