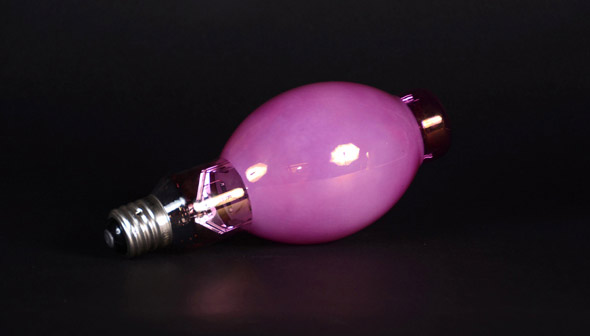 This artifact is what’s known as a colour-corrected mercury light bulb. Although more efficient than incandescent and fluorescent bulbs, the first mercury light bulbs produced an unattractive bluish-green light. In 1958, this type of bulb was coated with a phosphorescent finish to improve the quality and output of light. The coating converted unused UV radiation into red light and reduced the yellow–green spectrum of light. The coating decreased efficiency of the bulb by 20 to 25 percent but made it more suitable for lighting commercial, industrial, and recreational spaces.

More efficient than incandescent and fluorescent lamps, mercury lamps, also called mercury-vapour lamps, generated an electric arc in vaporized mercury to produce light. European scientists experimented with mercury-vapour light as early as 1835. The first commercial mercury lamps were manufactured in the United States in 1901 by Peter Cooper Hewitt. Mercury-vapour lamps were applied to street lighting in 1948, and after the colour was improved in 1958, they were commonly used to illuminate large indoor spaces, such as libraries, banks, halls, and gyms.