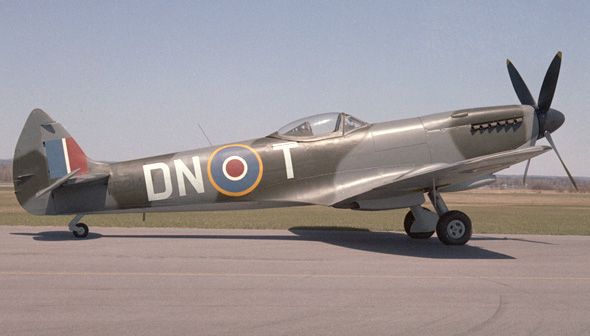 The Mk. XVI appeared late in 1944 and differed from the Mk. IX in having a Packard Merlin instead of a Rolls-Royce built engine. Some were fitted with a bubble canopy.

This Spitfire was manufactured by the Supermarine division of Vickers-Armstrong Limited at the Castle Bromwich Aircraft Factory in the United Kingdom in 1945. It was accepted by the RAF and served at the Central Gunnery School RAF in Leconfield, England from 1945 to 1950.

In the early 1950s the aircraft was removed from active service and stored. From 1956 to 1960 it was displayed at RAF Ternhill, England, initially for the Battle of Britain Day in September 1956.

The Spitfire was loaned to the Western Canada Aviation Museum in Winnipeg, Manitoba in 1988, and to the Canadian Warplane Heritage Museum at Mount Hope, Ontario in 2001.