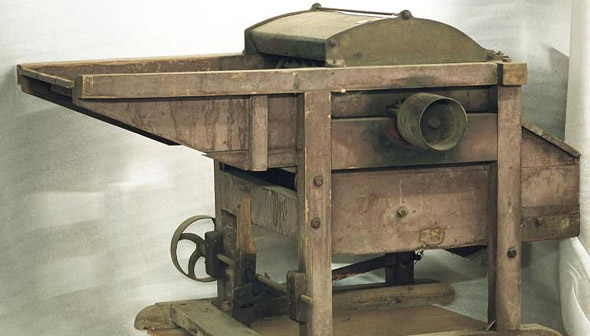 On loan from the Carleton-West Russell Historical Society

The history of this object is unknown. A paper tag on the artifact reads 1857, but design and construction details, including its cast iron concave, cylinder, and pulleys suggest that it was constructed in the 1870s.

This stationary thresher was hand-fed and belt-driven, likely from horse treadmill, and was small enough to be hauled by wagon. Its sifting and shaking mechanism would have been driven by a secondary belt connected to a pulley on the shaft, which drove an eccentric to create a shaking action that helped separate the grain from the straw. Operators had to manually remove the straw, as the thresher lacked a fanning mill and conveyor.