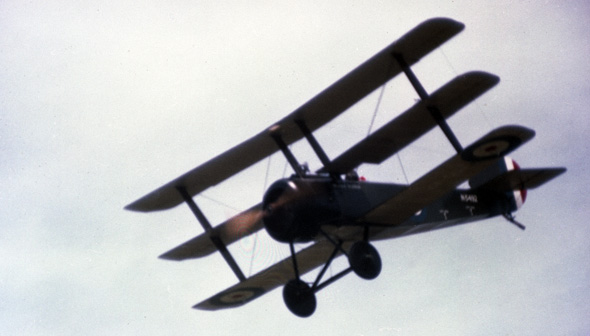 The Triplane was a successful attempt to produce a fighter with outstanding manoeuvrability and excellent visibility for the pilot. Records of procurement are very confused, but the Royal Naval Air Service received all of the small number of Triplanes available. Even though the Triplane remained in front-line service for less than a year, it was so successful that it inspired several German triplane designs. Only 150 Sopwith Triplanes were built.

The all-Canadian B Flight of No. 10 (Naval) Squadron, equipped with Triplanes, downed 87 enemy aircraft between May and July 1917. Called the Black Flight because of the black markings of their airplanes, their aircraft were named: Black Maria, Black Sheep, Black Prince, Black Roger, and Black Death.

The Museum's Triplane is a reproduction built by American amateur airplane-maker Carl R. Swanson between 1963 and 1966. The Museum purchased it in 1966, and provided and installed its Clerget 9B rotary engine. Wing Commander Paul A. Hartman piloted the aircraft during its first flight, on May 5, 1967 at Rockcliffe airport. It remained airworthy and flew on special occasions until 1971.