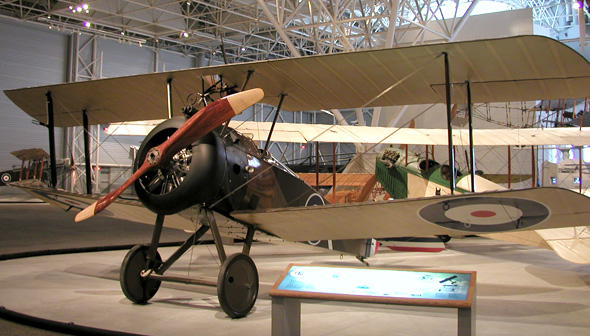 The Sopwith F.1 Camel was developed to replace the Sopwith Pup. Camels began to enter the Royal Flying Corps and the Royal Naval Air Service in the middle of 1917 and met with immediate success. Although mainly used in western Europe, Camels also served in Italy. Some Camels were assigned to home defence, with the cockpit positioned further back and guns placed on the upper wings. The 2F.1 Camel was produced for the RNAS with more powerful engines and modified armament. A total of 5 490 Camels were built.

The name “Camel” was derived from the hump-shaped cover over the machine guns. In order to combat Zeppelins, 2F.1 Camels were flown from barges towed behind destroyers, from platforms on the gun turrets of larger ships as well as from early aircraft carriers. A 2F.1 successfully flew after being dropped from an airship, an experiment testing an airship’s ability to carry its own defensive aircraft. An armoured trench-fighting version was flown, but did not go into production.

Transfer from the Canadian War Museum

The Museum's Ship Camel was manufactured by Hooper and Company Limited of London, England in late 1918. One of the last Camels to be produced, it was not completed in time to serve during the First World War. It was, however, used by the RAF until 1925, when it was transferred to Canada along with six other Ship Camels.

The Camel was used by the RCAF for demonstration flights and as a training airframe. It was loaned to the Canadian War Museum in 1957, and was later stored and displayed at the National Research Council in Ottawa. Restored between 1958 and 1959, and made airworthy between 1966 and 1967, the aircraft was flown between May and June of that year before being transferred to the Museum.