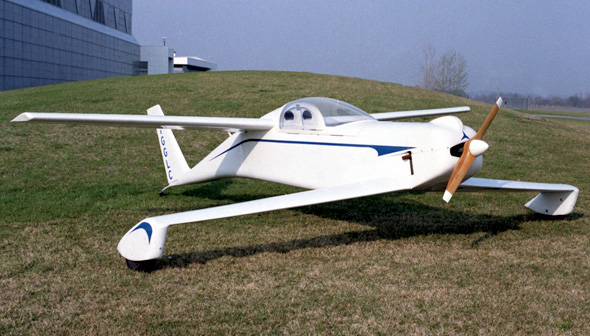 Made of glass fibre and foam, the Quickie was designed to be a fast and efficient, single-seat, sports homebuilt, powered by a small engine. The unusual tandem-winged , tailless aircraft was flown by each of its three designers on the day of its first flight. Since 1 mph (1.6 km/h) per engine horsepower at cruising speed is considered efficient, the Quickie’s 7 mph (11.3 km/h) per horsepower is remarkable.

Construction on the prototype Quickie started in August 1977, with design frozen in January 1978. By June 1978 the Quickie was offered as a complete kit with engine included. During the 1980s a more powerful engine was introduced which could also be fitted to earlier versions. A radical development was the Quickie Q2, a two-seat model prototype which was built in Surrey, B.C. and first flown in 1980. By the late 1990s, 3 000 one and two-seat kits had been sold.

The kit for this Quickie was manufactured by Quickie Aircraft Corporation of Mojave, California around 1983. It was assembled by Johannes Denis Vos in Brantford, Ontario in 1983 and 1984. The owner and operator first flew the Quickie in October 1984. Most of its flights were in the Brantford area. The aircraft received much attention when it was displayed at a Hamilton, Ontario air show in 1986.

The Quickie flew a total of 135 hours over the course of six years. The aircraft was donated to the Museum in 1990, when Vos ended his flying career.