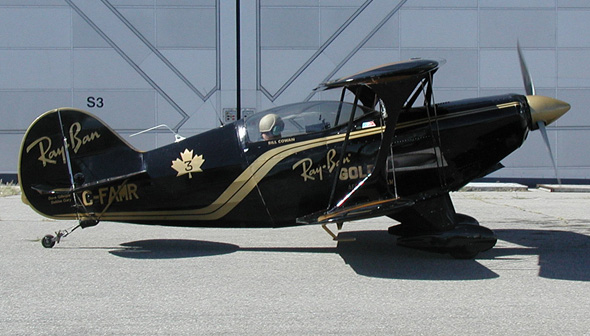 Pitts Specials carry a high profile in the world of sport aviation as they are acknowledged to be one of the world’s leading aerobatic aircraft, winning more competitions than any other type in history. These nimble aircraft incorporate different upper and lower wing sections that provide inverted performance equal to conventional “right side up” flight. This wing design also facilitates outside loops. The original Pitts design dates from the early 1940s and over the years more powerful engines and various aerodynamic modifications have led to several models that are capable of unlimited aerobatics carrying two persons.

This S-2A was manufactured by Aerotek Inc., of Afton, Wyoming, in 1973. During the 1970s, it was used by Canada's first civilian aerobatic team, the famous Carling Red Caps aerobatic team. This S-2A is the last surviving aircraft used by this aerobatic team. It was also flown by the Canadian Reds and the Ray-Ban Golds: teams that came after the Red Caps.

During the 1980s and the early 1990s, the S-2A was flown by William Cowan of White Rock, British Columbia. From 1995 to 2002, David Gillespie of Corman Park, Saskatchewan performed in the aircraft, primarily in Saskatchewan.

The aircraft was donated to the Museum in 2003. During the years that it was used, it was modified a number of times to incorporate changes that had been introduced in later Pitt Special models. The aircraft's current markings reflect its final years as a member of the Ray-Ban Golds team.