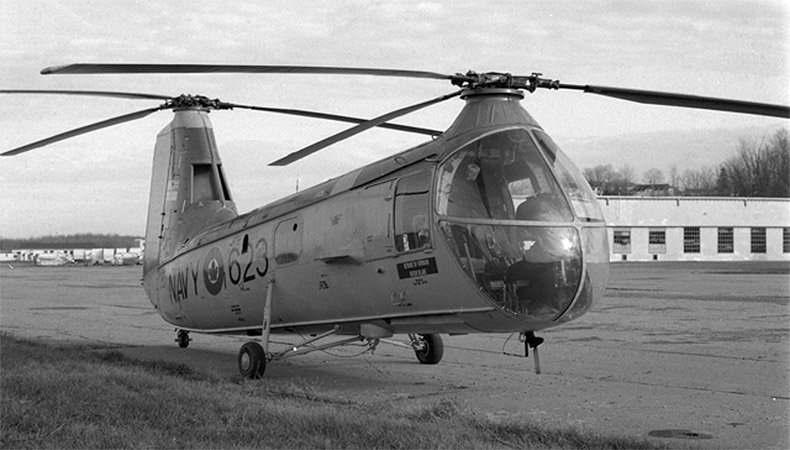 The HUP-3 was built to a US Navy requirement for a carrier-based helicopter for search-and-rescue and general transportation. Seventy similar aircraft went to the US Army under the designation H-25A. Considered too small, 50 were transferred to the US Navy as the HUP-3. The Royal Canadian Navy received three HUP-3s in 1954. Operating from HMCS Labrador in northern Canadian waters, they reported on ice conditions and conducted hydrographic and oceanographic surveys. The RCN HUP-3s were retired in 1964.

This aircraft was the last of a line of pioneer helicopters developed under the Piasecki name. Early versions of the HUP were called the “hupmobile” or “shoe”, because of their distinctive shape. A prototype performed the first known loop by a helicopter. A large cargo door in the side of the fuselage could accommodate a stretcher and hoist for rescue work. A floor hatch allowed 180-kg (400-lb) loads to be winched up into the cabin.

This HUP-3 was manufactured in May 1954 by Piasecki Helicopter Corporation in Norton, Pennsylvania. Built as a model H-25A Army Mule for the U.S. Army, it was immediately modified (door and winch were installed) for use by the Royal Canadian Navy.

The helicopter was flown to Halifax on May 18 to begin service with helicopter squadron HU-21 in June 1954. During its career, the HUP-3 was used for search-and-rescue operations and training duties, and was deployed aboard HMCS Labrador.