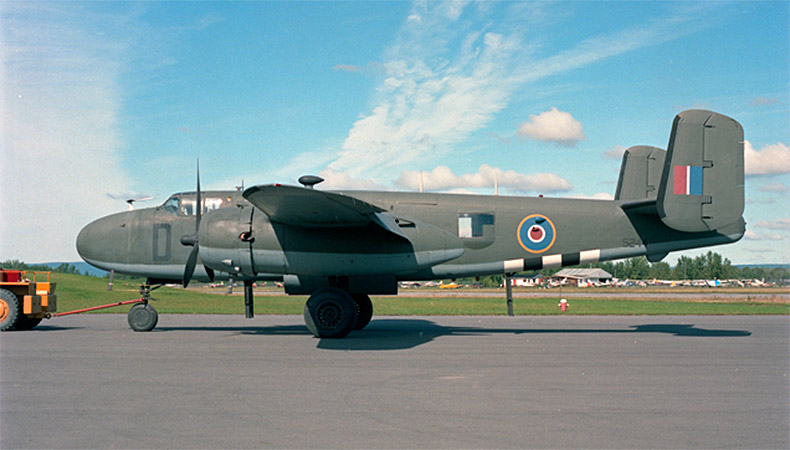 The Mitchell was a highly successful Second World War bomber and ground-attack aircraft which flew on every major front. Many versions of the Mitchell were produced: some with more powerful engines, some with heavy armament for surface attack, and some for pilot training and fast-transport duties. The Mitchell continued in service in the postwar era. The RCAF used both bombing and training versions well into the 1960s. Nearly 11 000 Mitchells were built in the United States between 1940 and 1945.

In 1942 Mitchell bombers flew off the aircraft carrier USS Hornet on the famous Doolittle raid to Japan. Because the Mitchell was far too large to land back on the carrier, the raiders flew on towards China. The surviving aircraft crash-landed there.

For surface attack some Mitchells were fitted with as many as 12 forward-firing machine guns. Others carried a 75-mm cannon, one of the heaviest guns ever fitted in an aircraft. The cannon’s 21 shells, each weighing 6.8 kg (15.1 lb), had to be hand-loaded by the navigator.

North American Aviation Incorporated in Kansas City manufactured this Mitchell as a B-25J for the United States Army Air Forces in 1945. Its early American service history is unknown, but prior to 1952 it was converted into a TB-25L pilot trainer.

In January 1952 the aircraft was taken on strength by the RCAF. It served at No. 1 Flying Instructor School in Trenton, Ontario until 1959. It was then briefly flown by No. 5 Air Observer School in Winnipeg, Manitoba before going to the RCAF's Central Experimental and Proving Establishment at Uplands airport.

In 1962 the Mitchell was stored in Dunneville, Ontario. The RCAF at Trenton refinished it in the markings of a No. 98 Squadron RAF aircraft in 1964, and it became part of the Museum's collection later that year.