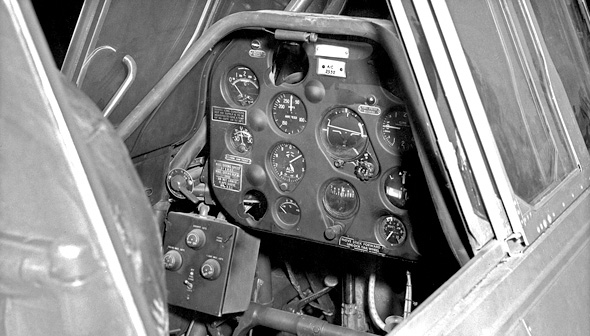 One of the best advanced training air craft ever built, the Harvard became a mainstay of the British Commonwealth Air Training Plan. Harvard IIBs were first ordered from Noorduyn in Montreal in January 1940. Noorduyn eventually built 2 800 harvards for the RAF and RCAF. Canadian Car and Foundry made 550 Mk.4s for Canada and the United States in the 1950s. The Mk.4 had an improved cockpit canopy and greater fuel capacity.

The Harvard must be considered one of the outstanding aircraft of Second World War and the early postwar years. From 1940 to 1955, nearly all American and British Commonwealth pilots received some training on Harvards. Strong yet unforgiving, requiring a delicate touch to keep straight during landing and take-off, it was an ideal training airplane. Canada built more Harvards than any other aircraft, with a total of 3 350 produced. In anticipation of a possible aluminium shortage, a wooden rear-fuselage and set of wings were developed and built, but not produced. Gunnery trainer and target tow versions were also developed but never produced. Skis were produced but never installed because a strengthened undercarriage was required.

On loan to the Atlantic Canada Aviation Museum

This Harvard was manufactured in 1941 by North American Aviation Incorporated in the United States and delivered to the RCAF. Between 1941 and 1945 it served at several Service Flying Training Schools under the British Commonwealth Air Training Plan. For the next eleven years, the Harvard served with the RCAF at Centralia, Ontario. In November 1956 it was used as a ground instructional aircraft at Camp Borden, Ontario. Donated to the Museum in 1961, it was displayed outdoors at the Canadian War Museum from 1972 to 1983, before becoming part of the collection at Rockcliffe airport. Since 1996 the Harvard has been on loan to the Atlantic Canada Aviation Museum in Bedford (near Halifax), Nova Scotia, where it is being restored.