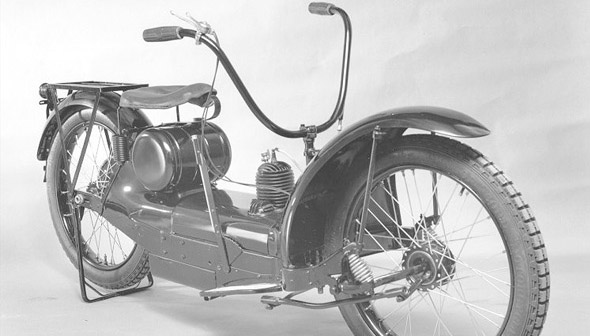 The Ner-A-Car design has several unusual features. The chassis is only a few inches above the road, which makes for a very stable and surefooted ride. It also features the first production example of hub-centre steering on a motorcycle. Hub-centre steering is characterized by a swing arm that extends from the bottom of the frame to the centre of the front wheel.

In the 1920s, “heavyweight” motorcycles were sought after by North American consumers. Given this demand for large bikes, sales of the smaller Ner-A-Car did not meet expectations. After two years on the American market, the Ner-A-Car Corporation decided to cease production of this motorcycle.

The Ner-A-Car was a feet forwards motorcycle designed by Carl Neracher in 1918. Initially, Neracher was unable to find American support for the construction of his motorcycle.  The Earl of Sheffield in England, however, was intrigued by the motorcycle’s design. He created the Sheffield-Simplex company, which began manufacturing the Ner-A-Car in 1920. The following year, Neracher was able to secure support for the production of his design in the United States.