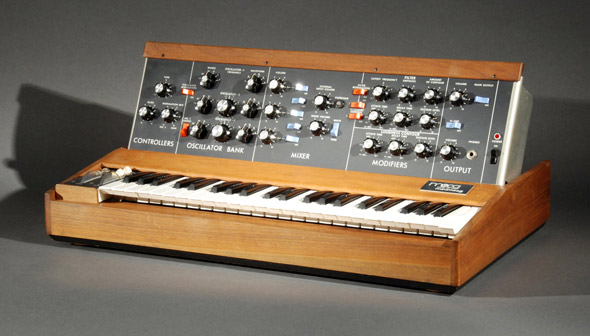 Part of a collection of electronic equipment for musical composition, performance, and recording, this example was owned and used by Paul Hoffert. Hoffert was a founding member of the Canadian jazz-rock band Lighthouse, and for a time worked in Hugh Le Caine’s electronic music lab at the National Research Council of Canada.

While not as versatile as the larger Moog synthesizers used in studios, the Minimoog was compact and affordable, and better suited to the life of a touring musician. Incorporating a number of modules controlled by knobs, switches, and wheels, the player could make adjustments to the sound output in real time. The Minimoog generated and manipulated sound output using the same method of voltage control pioneered in Hugh Le Caine’s Electronic Sackbut.

Introduced in late 1970, the Minimoog Model D quickly became an icon of the 1970s progressive rock and jazz-rock scenes. Used by such musicians as Keith Emerson, Rick Wakeman, and Chick Corea, the Minimoog was the first mass-produced synthesizer to become a “classic.” Over 12,000 were made between 1970 and 1981.