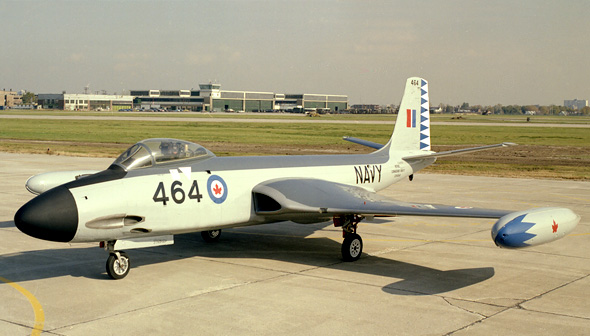 The Banshee entered US Navy service in 1948 as their second carrier jet fighter. They served with distinction with the USN in Korea. The Banshee replaced the Royal Canadian Navy’s Hawker Sea Fury as the RCN’s first and only jet fighter. The RCN acquired 39 Banshees from 1955 to 1958. Banshees operated from shore bases and from the aircraft carrier HMCS Bonaventure after 1957. The Banshee was the RCN’s last fighter and was not replaced when retired in 1962. A total of 805 were made.

RCN pilots deserve credit for being able to operate the Banshee successfully from the carrier HMCS Bonaventure. Its small size made jet-fighter operation difficult.

Donation from the Royal Canadian Navy

This Banshee was manufactured in 1953 by McDonnell Aircraft Corporation in St. Louis, Missouri. It was accepted by the U.S. Navy in April of the same year and served at naval stations in Florida and Virginia, and on three aircraft carriers.

When the aircraft was retired in 1962, it was kept outside at HMCS Shearwater and was stripped of some of its equipment. In 1965 it was donated to the Canadian War Museum and moved to Rockcliffe airport. It later became the property of the Museum. From 1975 to 1986, the aircraft was restored by No. 400 Air Reserve Squadron, with assistance from No. 411 Squadron at Downsview, Ontario.