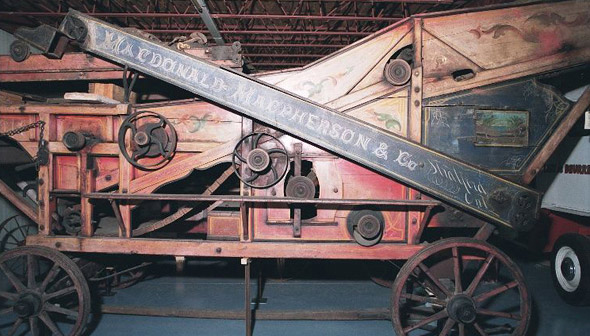 Trade with the Henry Ford Museum in Dearborn, Michigan, in 1978

This thresher’s history is well-documented. According to the Stratford Beacon-Herald, it belonged to area farmer Werner Heinbuch, who purchased the thresher in 1869 for $400. In 1927, Heinbuch’s son sold it to the Henry Ford Museum. It was repatriated in 1978 through a trade with the Ford Museum. The Macdonald & MacPherson Company was formed in Stratford, Ontario between 1869 and 1875. The “Standard” thresher was its first product. In 1884 it began production of the “Decker,” a thresher with improved grain-separation technology. In the 1890s the company became the Macdonald Manufacturing Company and in 1905 began to manufacture a steam traction engine also known as the Decker.

Wheeled threshing machines were first introduced in the 1860s. They further mechanized grain harvesting, automating the process of separating grain from straw and chaff. Built of wood and initially powered by horse power, threshers were later powered by traction engines and tractors. The Macdonald & MacPherson Standard thresher is an apron-style thresher, which was common before vibrating decks were adopted in the 1880s. The Standard, equipped with a canvas apron, also features a straw stacker, an adjustable conveyor that deposited the waste straw in a pile at the machine’s rear. In 1885 the Standard was replaced by the Decker, which replaced canvas aprons with vibrating wood decks to improve grain and straw separation.