Skip to main content
Our museums are still open! Advance tickets are required for all visitors, including members. Learn more. 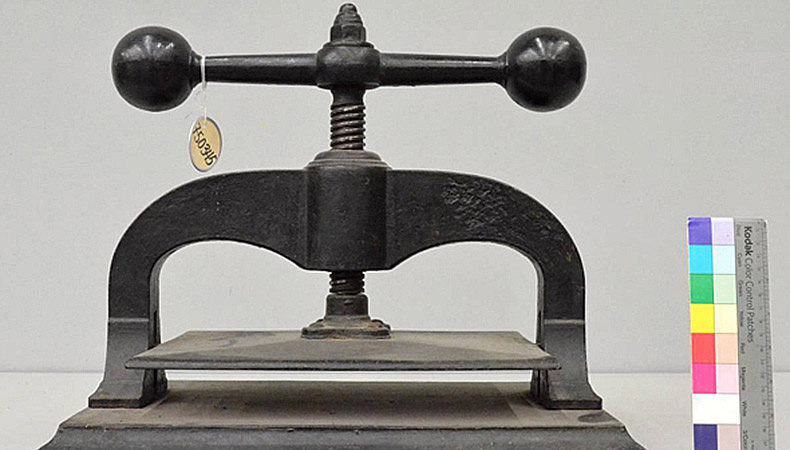 The Museum acquired this artifact in 1975. Its manufacturer, place of making, and history of use are unknown. Artifacts like this are examples of “type collecting,” where museums acquire representative examples of a particular type of object or technology. This is in contrast to “provenance collecting,” which focuses on an artifact’s previous ownership and/or use.

James Watt, better known for his revolutionary steam engines, patented the letter copying press in 1780. The press features a fixed frame and a movable horizontal plate (the platen) raised and lowered by a large screw. To copy a handmade letter or drawing, an office clerk laid a sheet of dampened tissue paper over the original and placed them together in the press. Under pressure from the lowered platen, ink would transfer from the original to the tissue, creating a reverse copy that could be read through the thin paper. By placing waterproof oiled paper between multiple layers of tissue and originals, copies of several documents could be made at the same time.

As industry and commerce boomed in the nineteenth century, trade developed at a rapid pace, and business documents had to be reproduced equally fast. The copying press facilitated this process by eliminating the need for copy clerks to produce handwritten or hand-drawn copies. Copying presses were fixtures in offices until at least 1900, although in the second half of the nineteenth century, they were gradually replaced by two newer inventions: the typewriter and carbon paper.