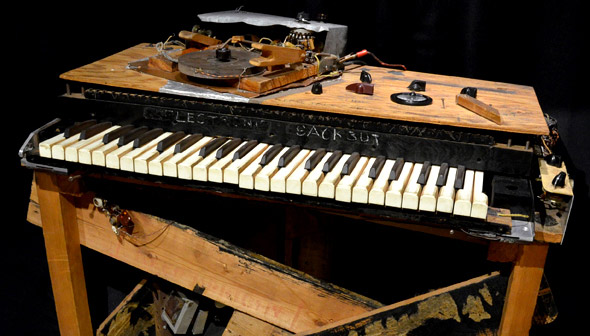 The Electronic Sackbut was designed by Hugh Le Caine at his home studio in Ottawa, Ontario. It was begun in 1945 and completed in 1948. In 1954, Le Caine began to work full-time on electronic music in a new lab at the National Research Council of Canada (NRC). His Sackbut was then brought to the NRC for further development. Of four versions of the Sackbut, this is the oldest surviving model. The NRC transferred the instrument to the Museum in 1975.

Unlike electromechanical instruments such as the Hammond organ (with which Le Caine was familiar), the Electronic Sackbut used an entirely different method of sound generation and control known as voltage control. This method later became the standard approach in electronic music. Because it pioneered this technique, the Sackbut is considered to have been the first synthesizer. The Electronic Sackbut produced only one note at a time, but its systems for control of that one sound were extraordinary: the keyboard was sensitive to vertical pressure, so that alterations of pressure produced changes in volume, and it was also laterally sensitive, so that side-to-side motion produced subtle (or dramatic) sliding changes in the pitch of the sound. While the right hand played the keyboard, selecting notes and controlling volume and vibrato, the left hand operated an innovative waveform control device that could continuously change four different aspects of the texture of the sound. It was for this versatility in pitch and timbre that Le Caine named his instrument the sackbut, after an ancestor of the modern trombone dating from the Renaissance and Baroque eras.

In designing the Electronic Sackbut, Le Caine adapted technologies already familiar in atomic physics, radar, and radio technology, all areas in which he had worked first at Queen’s University and later as a scientist at the NRC. Le Caine used devices such as waveform generators, filters, frequency modulators, and amplitude modulators, and transposed the signals into the human auditory range.