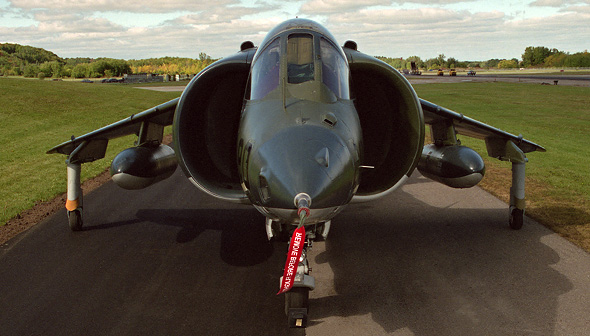 The British Harrier ground attack fighter is one of the most innovative aircraft ever designed and the first vertical takeoff and landing (VTOL) fixed-wing aircraft to go into service. A key element of its success is the Rolls-Royce Pegasus vectored-thrust turbofan engine.

The first P.1127 proof of concept prototype hovered briefly in October 1960. Later trials showed its exceptional capabilities. The Royal Air Force (RAF) ordered its first production Harriers in 1966 and deliveries to a combat squadron began in 1969. The United States Marine Corps, with its need for close air support in areas often without airfields, has been an enthusiastic user since 1971.

Loan from the U.S. Marine Corps

This Harrier was manufactured by Hawker Siddeley Aviation in the United Kingdom in 1973. It entered service with the U.S. Marine Corps in September that year. The aircraft served with three attack squadrons and was used on the east and west coasts of the United States, the Hawaiian Islands and in Japan. It was also attached to assault ships USS Guam, USS Peleliu and USS Inchon. The aircraft was taken out of service in 1985.

Since 1997, the aircraft has been on long-term loan to the Museum from the U.S. Naval Inventory Control Point in Philadelphia. This loan was the result of an initiative of British Aerospace, the cooperation of the U.S. government and the financial assistance of Rolls-Royce.